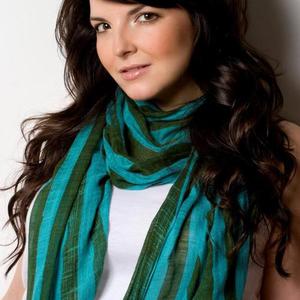 Talk about starting with a bang. Adaline achieves near Judy Garland levels of melodrama on ?That's What You Do Best?, the stately electro-torch song that opens her new album, Modern Romantics. But she doesn't get there without boxing your ears with wiggy sax (from Shuffle Demon Richard Underhill) and unhinged guitar solos (by Hawksley Workman) on the way, the latter sounding like it was recorded in a reinforced missile silo. There's a lot of tastefully rendered sonic action on the way to that quivering, love-burnt climax.

It's what Adaline does best; elegant structures that happen to be wildly hooky. ?It's a pop record,? she says of her sophomore effort, ?but certainly not straight down the middle. I have pop sensibilities, but I hope I come across as a little deeper than a pop tart.? Deeper by orders of magnitude, based on the sheer stylistic scope of Modern Romantics, and the quixotic path it takes through sexy, minatory trip hop (?Keep Me High?), smartly built robo-pop (?The Noise?, ?Sparks?, ?Stereo?), and even the sad-erotic cabaret of ?Cost Is Too High (Not To Love)?. That last number is what you might have gotten if David Lynch and Julee Cruise had composed a song for the Eurovision Song Contest in 1969.

Adaline and her collaborators Hawksley Workman, Marten Tromm, and Tino Zolfo have made that kind of record. Modern Romantics is invested with the depth and imagination you only ever get from high-end, ultra-talented music nerds, whether it's in the meticulously layered percussion and noise ? timpani included ? of the Metric-gone-industrial ?Wasted Time?, or the tonal shifts that bring such deliberate force to Adaline's cathedral-sized ballad, ?Say Goodbye (I Won't Even)?.

?I wanted to take a very European approach to the record,? she says, adding that she and her busiest partner, Hawksley Workman ? who played on and produced nine of its 12 tracks ? were throwing names like Portishead, Bat for Lashes, La Roux, Beck, and Goldfrapp around when they entered Toronto's Canterbury Studio for four weeks. ?Groove artists,? she calls them. ?I wanted it to sound world class. A lot of people seem to be doing these very chill, laid back, organic records, and I kinda wanted to be a little more aggressive in terms of the sounds and production.?

Adaline was actually so aggressive that Modern Romantics was mixed twice and then sent back for three separate revisions during mastering, ?just so I could get the drums right,? she chuckles. ?I'm sure my label thinks I'm a little insane.? In contrast, Adaline also points out that Workman booted the overweening habits right out of her in the studio. No more ?laboring over every second,? like she did on her acclaimed 2008 debut, Famous for Fire. ?He has a very fast, very spontaneous recording method,? she says. ?I found that a little stressful because I tend to be more type A. But we balanced each other out.? Workman also teased out Adaline's ?cheeky? side for the woe-is-me-I'm-successful jiggle pop of ?Stereo?, while a lot of the vocals on Modern Romantics are first takes. In the case of ?Silent Player?, Adaline's scratch vocal is what you hear, as the song was written and recorded in Tino Zolfo's Granville strip hotel room with ?everyone drunk and puking everywhere? on the street below.

Somewhere in the midst of all this push and pull, Adaline managed to bash together a toweringly impressive record, not to mention a neatly symmetrical one. The final track ?Heartache? bookends ?That's What You Do Best? with a real curtain-closer; a hall goodbye that's lush, romantic, heartsick, and grand. It's Adaline's melancholy side writ large ? ?I was a pastor's child, I have seen a lot of drama in my life,? she shrugs ? and it's the final touch on a record that's as deep, as it is wide, as it is breathtaking.

-From the band's webpage - www.adalinemusic.com

Adaline is a Canadian musician - she was born in Ottawa Ontario and grew up all over Ontario and moved to Vancouver when she was 15 where she spent 10 years before moving back to Toronto this past year
She has 3 albums out: Famous For Fire (2008), Neo-Noir (2010), and Modern Romantics (2011)


Adaline was also the name of a rock band from Boulder, Colorado.