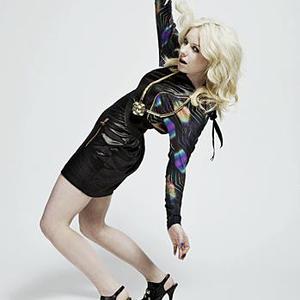 Victoria Christina Hesketh, also known by her stage name/pseudonym Little Boots, is an English electropop singer-songwriter. Her stage name comes from a nickname given to her by a friend, a reference to her unusually small feet. As a musician, Little Boots sings and plays the piano, keyboards, synthesizer, Stylophone and a Japanese electronic instrument called Tenori-on. After a return to college to focus on her studies, Hesketh along with two of her fellow students formed the electronic/indie pop band Dead Disco.

After a return to college to focus on her studies, Hesketh along with two of her fellow students formed the electronic/indie pop band Dead Disco. The band had limited releases of their four singles but due to increasingly different ideas about the band's musical direction, Hesketh left to pursue a solo career. Hesketh has cited as influences The Human League, Gary Numan, Kraftwerk, Pink Floyd, Kylie Minogue, Britney Spears, and Jean Michel Jarre.

Hesketh began writing her own songs and posting covers on the social networking sites such as YouTube and MySpace. After appearing on several shows including Later... with Jools Holland and Last Call with Carson Daly, Hesketh entered production on her debut album Hands. With increasing media attention regarding her then-yet-to-be-released debut album, Hesketh topped the BBC Sound of 2009 poll and received a BRIT Critics Choice nomination. With the release of her debut she has been linked to a recent wave of breakthrough female artists in their twenties playing 1980s-influenced music, including Lady Gaga, Ladyhawke, Florence and The Machine, and Elly Jackson of La Roux.

Her debut album, Hands, released on 8 June 2009, peaked at number five on the UK Albums Chart and at number twenty on the Irish Albums Chart. The first single off the album New In Town became a top twenty hit, while the next single "Remedy," produced by redone, reached the top ten. She has also released the EP Illuminations in the United States.
Blackpool, Lancashire, England .2005