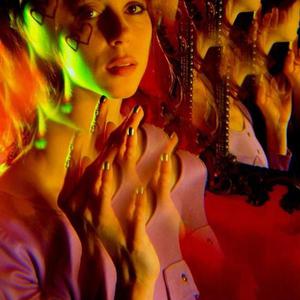 Glass Candy is an American electronic band from Portland, Oregon that formed in 1996. The band consists of vocalist Ida No and guitarist/synthesist/general producer Johnny Jewel. While the band's early work blended noise rock with electropop, their later work incorporates Italo disco. The band is known for evolving through the years since their original collaboration, and experimenting with various musical genres.

While the band's early work blended noise rock with electropop, their later work incorporates Italo disco. The band is known for evolving through the years since their original collaboration, and experimenting with various musical genres.

They have released a number of albums since the early 2000s, their most recent being 2008's Deep Gems.

Glass Candy was formed by Ida No, from Vancouver, Washington, and Johnny Jewel, from Austin, Texas, in 1996. The two began working together in Portland, Oregon, just across the Columbia River from No's hometown of Vancouver, Washington. No describes their early work as "droney and weird." Their first two singles, which they self-released under the name "Glass Candy & the Shattered Theatre", were "Metal Gods" (2001) and a cover of Josie Cotton's "Johnny Are You Queer" (2002). They toured with The Convocation Of... in 2001, and released a live album that year on Vermin Scum. Their first studio album, Love Love Love, was issued on Troubleman Unlimited in 2003. A second full-length followed on Troubleman the next year. Jewel founded Italians Do It Better with Mike Simonetti as a subsidiary of Troubleman. In 2007 Glass Candy released their third album B/E/A/T/B/O/X on this label to considerable critical praise. In late 2008, a rarities, b-sides and remix album was released under the name Deep Gems. In a review of Deep Gems, Spin Magazine referred to the band as "an eccentric Portland pair" that "spook the dance floor".
Glass Candy songs were used for a Chloe runway show, as well as used by Karl Lagerfeld for the Spring/Summer '08 Chanel Haute Couture fashion show and the Fall/Winter one of '08/'09.
Recently Glass Candy's "Digital Versicolour" was used in the soundtrack to Nicolas Winding Refn's feature length film Bronson.

Warm In The Winter (EP)