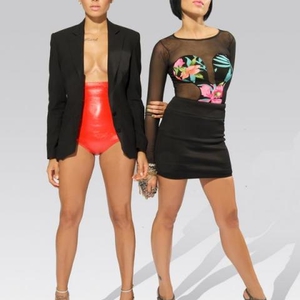 Natalie and Nicole Albino (born in New York City) are identical twin sisters who sing under the name "Nina Sky". They are half-Puerto Rican and half-Dominican. Their parents moved from Puerto Rico and were divorced when the girls were very young. The twins' mother remarried with a DJ, who also happened to be Puerto Rican. They grew up in the Queens and Roosevelt Island sections of New York. Since their stepfather worked as a DJ, the twins were influenced by different types of music.

Their parents moved from Puerto Rico and were divorced when the girls were very young. The twins' mother remarried with a DJ, who also happened to be Puerto Rican. They grew up in the Queens and Roosevelt Island sections of New York.

Since their stepfather worked as a DJ, the twins were influenced by different types of music. When the sisters were only 7 years old, they wrote their first song, "Sisters", and by the time they were 10, they already knew that they wanted to become singers.

The twins' parents were very supportive of their daughters' ambitions. The stepfather even gave them guitar and drum lessons. They were taken to auditions and, on some occasions, they even performed on some showcases. The sisters wanted to come up with a name of their own and by using the first two syllables of their names "Ni" and "Na", came up with Nina. They then added Sky, which for them represented "the sky's the limit".

They continued to go to school and, in their spare time, worked as DJ's. In the year 2000, they met the Jettsonz, a pair of music producers who helped them develop their own sound.

In 2004, Jettsonz introduced the girls to Cipha Sounds, a hip hop DJ who worked for the Star Trek record label. Cipha Sounds was impressed when he heard the girls sing and suggested that they use the Coolie Dance Riddim. The twins then proceeded to write "Move Ya Body", mixing riddim with Caribbean moves and made a demo.

The demo fell into the hands of Eddie O'Loughlin, the president of Next Plateau Entertainment (which is a division of Universal Records). O'Loughlin signed the twins to a contract and they started working on their debut album.

The single "Move Ya Body" was released on April 27, 2004 and reached number 17 in the hit charts. Urban music and rhythmic top 40 stations quickly added the song to their play lists, sending the song up the charts. By July 17, "Move Ya Body" had gone to the top 5 on both sides of the Atlantic and had also reached the top 5 of a world combined r&b chart based on the US, UK, Germany, France and Australia. The song had also reached the top 50 of the Australian charts. On June 29, 2004 they released their first, self-titled, album, featuring Betty Wright.

Nina Sky's upcoming album, "The Musical", was originally slated for a Sept. 2006 release. The album has since been pushed to Fall 08 and it marks the girls' sophomore effort. Producers include Ryan Leslie, Cipha Sounds, Cool & Dre, LunyTunes, The Jettsonz & more. Guests include Rick Ross, Trey Songz, Ne-Yo, Styles P. & Sheek Louch. A few buzz tracks have been making rounds across the net including, "Flippin' That", a Cool & Dre produced track which features Def Jam rapper Rick Ross. As well as, "Sugar Daddy" a cool mid tempo heater track, and "Clothes Off" featuring Daytona.

The Albino twins, Natalie and Nicole continue to work and promote their music. Their new album "La Conexion", is a mixtape album that features collaborations with Ivy Queen, Aventura, Tony Touch, Yaga y Mackie, Pitbull and production from DJ Kazzanova, Mysto & Pizzi, and The Jettsonz.