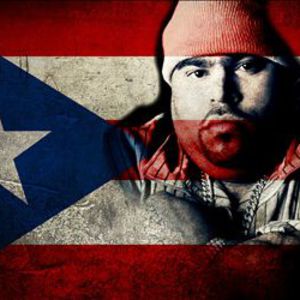 Christopher Rios (November 9, 1971 - February 7, 2000), better known as Big Pun or Big Punisher, was a Puerto Rican American rapper who emerged from the underground rap scene in The Bronx in the late 1990s. He first appeared on albums from The Beatnuts on the track "Off The Books" and on Fat Joe's second album Jealous One's Envy, on the track "Watch Out", prior to signing to LOUD RECORDS as a solo artist.

Big Pun's career was cut short in 2000 at age 28 by a fatal heart attack due to his obesity. He is survived by a wife, Liza Rios, and three children. Big Pun was the first solo Latino rapper to sell over one million LPs. His first stage name was Big Moon Dawg. His name comes from the Marvel comic book anti-hero The Punisher.

Born in the South Bronx of Puerto Rican descent during the early years of hip-hop, Christopher Rios grew up enjoying basketball, boxing, and other sports. He met his wife Liza in the eighth grade. At the age of five, he broke his leg in a Manhattan municipal park, resulting in a lawsuit against the City of New York, later settled out of court. He received a lot of money in compensation. By all accounts from Pun's family, his early years were very difficult, including witnessing his mother's drug abuse, his father leaving the family, and a stepfather who was very hard on Pun. According to his grandmother, Pun would become angry and self-destructive, punching holes in the walls of his family's apartment and eating the chunks of drywall rocks . At the age of 17, Rios dropped out of Stevenson High School and for some time was homeless, staying in abandoned buildings or at friends' homes.

Sometime during the '80s, he formed the Full a Clips Crew with Triple Seis, Prospect and Cuban Link who was at the time named "Lyrical Assassin". At this point Big Pun was operating under the alias Big Moon Dawg. Rios met fellow Puerto Rican and Bronx rapper Fat Joe in 1995 and made his commercial debut on Joe's second album, Jealous One's Envy, in addition to appearing on a b-side to Joe's "Envy" single, "Fire Water."

Later, "I'm Not a Player" (featuring an O'Jays sample) was supported by a significant advertising campaign and became an underground hit. The song's remix, "Still Not a Player" (featuring Joe), became Big Pun's first major mainstream hit. His full-length debut Capital Punishment followed in 1998, and was the first album by a solo Latino rapper to go platinum, peaking at #5 on the Billboard 200. Capital Punishment was also nominated for a Grammy, but lost out on the award to Jay-Z's Vol. 2: Hard Knock Life. He became a member of The Terror Squad, a New York-based group of rappers founded by Fat Joe, with most of the roster supplied by the now-defunct Full a Clips Crew.

Despite his athletic adolescence, Big Pun struggled with his weight for most of his life; his weight fluctuated in the early 90's between obese and morbidly obese. In the last years of his life he fluctuated between 450 and 697 pounds. Big Pun enrolled in a weight-loss program in North Carolina, in which he lost 100 pounds, but he eventually quit the program before completing it, returning to New York and gaining back the weight he had lost. On February 7, 2000, Big Pun suffered a fatal heart attack and respiratory failure in a hotel, Crowne Plaza, in White Plains, NY.

His second album, Yeeeah Baby, completed before his death, was issued as scheduled in April 2000. It peaked at #3 on the Billboard charts and earned gold record status within three months of its release. It eventually went platinum. A second posthumous album, Endangered Species, was released in April of 2001. Endangered Species collected some of Pun's "greatest hits," previously unreleased material, numerous guest appearances, and remixed "greatest verses." As with his other albums, it also peaked in the top ten of the Billboard 200, reaching #7, but didn't sell as much as the previous Pun albums had.

In recent times, Big Punisher was featured with Fat Joe on "Duets: The Final Chapter," an album of tracks featuring the Notorious B.I.G, also deceased. The track "Get Your Grind On" begins with a Big Pun radio interview in which he said he would perform a duet with Biggie at the gates of heaven. Punisher was also featured on a track from the revived Terror Squad's second album, True Story, on the track "Bring 'Em Back" with Big L.

Sony Records has been considering releasing a second posthumous album featuring unreleased material, but the project is being delayed by Sony. Liza Rios also held an auction in 2005 for her deceased husband's Terror Squad medallion, citing financial difficulties in the wake of Pun's death, and again claiming to have not received any royalty checks for Pun's posthumous album sales (save for a small check from the sales of Endangered Species).

Big Pun rapped at high speeds. He used huge multies and internal rhyme schemes. He showcased his punchline capabilities on 'Dream Shatterer', multies and flow in 'Twinz', 'You ain't a Killer' and 'Boomerang'. He was influenced heavily by Kool G Rap and Big Daddy Kane. He also showcased superior topic versatility ranging from street life to sex/relationships and politics to social injustice.

In Memory Of Big Pun 2 (Bootleg)