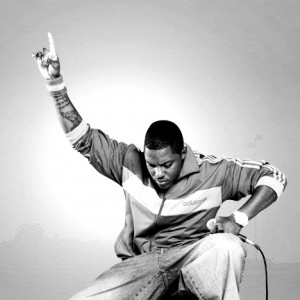 Mason Durell Betha (born August 27, 1975),[1] better known by stage name Mase (often typeset as Ma$e) who was previously known as Murda Ma$e, is an American rapper, songwriter, actor and inspirational speaker. He was an artist on Sean "Diddy" Combs's hip hop label Bad Boy Records. He was introduced as Bad Boy Entertainment's next big artist during the summer of 1996 when he was featured on the remix to 112's debut single, "Only You", which peaked at number one on Billboard's Hot Dance Singles Sales chart as well as its Hot R&B/Hip-Hop Airplay chart.

With his soon-to-be-trademarked[citation needed] slow flow, Mase quickly developed a crossover fan base as he was featured on original tracks, as well as remixes, by popular R&B artists such as Brian McKnight, Mariah Carey, Keith Sweat, and Brandy, among others. Puff Daddy (Diddy) featured Mase on "Mo' Money, Mo' Problems" from The Notorious B.I.G.'s double-LP Life After Death, the album's biggest hit single. He then featured Mase on several songs on his own debut album, No Way Out: the lead single, "Can't Nobody Hold Me Down", which hit number one on the Rap, R&B, and Pop charts, as well as on "Been Around the World", which would also reach number one on Billboard's Hot Rap Tracks. By the time Mase released his own debut album, Harlem World, in late 1997, the rapper had become Bad Boy's premier artist, filling the void left by the death of Biggie Smalls. He is married to Twyla Betha and leads an international ministry.
Contents
[hide]

Rapper Mase was born Mason Durell Betha in Jacksonville, Florida on August 27, 1975, moved to Harlem, New York City with his family at age five, returned to Florida at age 13, and then moved back to Harlem two years later.[1] Betha was a point guard for the Manhattan Center High School basketball team and in 1993 he performed as "Murder Mase" in a rap group called Children of the Corn which also included successful solo artists Big L and Cam'ron (at the time known as Killa Cam). Of his ten childhood friends, eight were murdered and two went to prison. While attending SUNY Purchase, Mase met hip hop producer Country, was introduced to producer Sean Combs, and dropped out of college to pursue a rap career.[2]
[edit] Career
[edit] Harlem World

Mase's sophomore effort, Double Up, was released in 1999 and distributed by Bad Boy Records and sold 107,000 copies in its first week, debuting at #11. Though it reached #5 when popular rap music was dominated by Master P and his No-Limit crew. Double Up also featured much more aggressive material. Perhaps no other sign was as clear as a line in the last song of the album, "From Scratch": "If I could do it all again, I'd do it all for Christ."

On April 20, 1999, during an interview with Funkmaster Flex on New York radio station Hot 97, Mase announced his retirement from music to pursue "a calling from God." He felt he was leading people, friends, kids and others down a path to hell, stating that he left to find God in his heart and follow him.[citation needed] He declared it was time for him to serve God in his way, saying rap was not real and that he wanted to deal with reality, and that he had become unhappy with what he did, no matter how much it paid.[citation needed]
[edit] Return to music and subsequent controversy

After a five-year hiatus from the music industry, Mase made a comeback with "Welcome Back" during the summer of 2004. Prior to the album's release, the rapper was featured on Nelly's "In My Life," as well as the remix to Fat Joe's "Lean Back".

Mase's third album, Welcome Back, released August 24, 2004. The album debuted at #4 on the charts, selling 188,000 copies in the first week; the album would eventually go gold, selling 559,000 copies in the United States. Released after a five-year break from the rap scene, the album was a product of Mase's newly developed Christian persona. Portraying a "cleaner" image during this short-lived return to the industry, Mase dubbed himself "a Bad Boy gone clean," on the lead single, also titled "Welcome Back." This new approach to rap was received with mixed reviews. However, even though the album was not a commercial success like Harlem World, the singles, "Welcome Back" and "Breathe, Stretch, Shake," received moderate radio airplay and video play on BET and MTV, with the latter reaching #28 on the Billboard Hot 100; both singles were also certified gold by the RIAA.

Mase for a short time had recorded for G-Unit. He has since said that working with the group was not something he regrets, but that the message he was sending was a mistake. He joined G-Unit to appeal to a different audience so they could see that they could change just as he did, thinking that "in order to get people where I'm at, I have to go back to where I once was." Under G-Unit, he released a "Crucified 4 The Hood: 10 Years of Hate," a mixtape from the DJ Whoo Kid series, but an official album was never released. According to 50, Diddy refused to let Mase out of his contract with Bad Boy for anything less than $2 million. Uncertain that Mase's album would sell well enough to make up for that type of investment, 50 gave up on trying to bring Mase onto G-Unit.
[edit] Second comeback

Following the formula that worked for him 13 years earlier, Mase has begun to appear on popular R&B artists' remixes. In early June 2009, he was featured on the last verse of "Uptown Boy" by Harry O, signed to The Inc., which also features Ron Browz. Weeks later, Mase appeared on a street remix for Drake's "Best I Ever Had." Mase stated that since the death of Michael Jackson it has lit the fire inside him and he is ready to come back. He appeared on Power 105.1 to have a phone conversation with "The Prince of New York" DJ Self to discuss his latest attempt at a comeback. During this interaction, former-friend-turned-rival, Jim Jones, called in to make peace and hinted at the possibility of the two working together in the near future. Mase would then use that very radio show as his outlet to release new music throughout the rest of the summer as he'd have a new song or feature premiere every Friday on DJ Self's show. On July 3, 2009, Mase appeared on the remix to Trey Songz' hit single "I Need A Girl," where he shouts out "And Diddy told them that '10 years from now we'll still be on top. I thought I told you that we won't stop," referring to the line on "Mo' Money, Mo' Problems."

In October 2009, Mase appeared on a live on-air interview on V-103 with appearance release forms to Bad Boy Records which he gave to Diddy in the middle of the interview for his signature. Diddy signed the forms and was quoted: "He has the freedom to go do whatever he wants to do." However, the forms do not end Mase's contractual obligations to Bad Boy Records, but rather allow him to appear on songs with artists from other labels.[3]