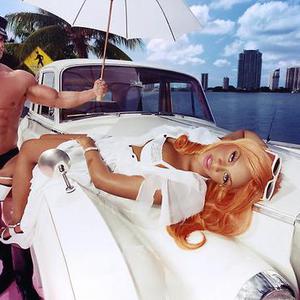 Kimberly Denise Jones (born July 11, 1975 in Brooklyn, New York), better known as Lil' Kim or Queen Bee, is a Grammy Award winning American rapper and actress signed to Jay-Z's Roc Nation label. She is known for her sexually explicit lyrics and for being one of the most prominent female rap artists of her time. She began her career with Junior M.A.F.I.A., whose album Conspiracy generated three hit singles.

Her debut solo album, Hard Core, was released in 1996 and she followed this with 2000's The Notorious K.I.M., 2003's La Bella Mafia and 2005's The Naked Truth which was released on the day she went to jail for a year for perjury charges.

Jones was born in the Bedford-Stuyvesant neighborhood of the New York City borough Brooklyn. At the age of 9, her parents separated, and her father raised her until he expelled her from home. With her life at home struggling she decided to move in with friends. While struggling through her personal life, Kim met The Notorious B.I.G., who was a key figure in both her personal and artistic life, particularly when Wallace had gained popularity and influence through his relationship with Bad Boy Records.

In 1994, B.I.G. was instrumental in introducing and promoting the Brooklyn based group, Junior M.A.F.I.A., which included Lil' Kim. The group's first and only album was titled Conspiracy. Three hit singles came from Conspiracy: "Player's Anthem" (peaked at #7 on the Billboard [Hot R&B/Hip-Hop Songs] chart and #2 on the Hot Rap Tracks chart), "I Need You Tonight" (#43 R&B, #12 Rap), and "Get Money" (#17 on the Billboard Hot 100, #4 R&B, #2 Rap). The Recording Industry Association of America (RIAA) certified Conspiracy Gold on December 6, 1995, marking sales of 500,000 units. "Player's Anthem" was Gold, and "Get Money" went Platinum (sales of a million units).

After a year with Junior M.A.F.I.A., Jones began a solo career by making guest performances on R&B albums and recording her debut album, Hard Core, which was released in November 1996. The album peaked at #11 on the Billboard 200 and #3 on the Billboard Top R&B/Hip-Hop Albums chart. Hard Core was RIAA-certified double platinum on March 14, 2001 after having been certified Gold on January 6, 1997 and Platinum on June 3, 1997. The album's lead single "No Time", a duet with Sean "Puff Daddy" Combs (who would later change his stage name to "P. Diddy" and then "Diddy"), reached the top spot of the Billboard Hot Rap Tracks chart and was certified Gold by the RIAA. The following single, "Crush on You", reached #6 on the Hot 100 and #2 on the rap chart. A remix of the album's track "Not Tonight" saw Lil' Kim team up with Missy Elliott, Angie Martinez, Da Brat and Left Eye of TLC. The song was part of the soundtrack to the Martin Lawrence movie Nothing To Lose, nominated for a Grammy Award, and certified Platinum. In one stockholders' meeting of Warner Bros. Records, activist C. Delores Tucker criticized the label "for producing this filth," referring to perceived graphic sexual content in Kim's lyrics.

In 2005, Kim was found guilty of conspiracy and perjury for lying to a grand jury about a shooting incident involving the entourage of rap duo Capone N Noreaga and her reported fellow BK rival Foxy Brown. She was fined $50,000 and sentenced to a year and one day at the Federal Detention Center in Philadelphia, which she reported to on Monday, September 19, 2005. Her designated federal inmate prison number is 56198-054. The Federal Bureau of Prisons Inmate Locator shows her projected release date as August 2, 2006.

Kim was released from federal prison July 3, 2006, a month earlier than her projected release date due to good behavior. She spent the last thirty days of her sentence under house arrest.

Took Us A Break (CDS)

Greatest Of All Time