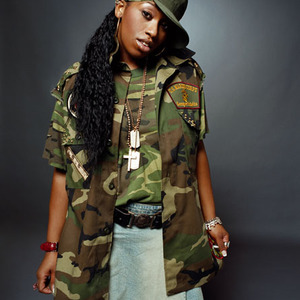 Melissa Arnette Elliott (born July 1, 1971 in Portsmouth, Virginia), better known by her stage name Missy "Misdemeanor" Elliott, is an American Grammy Award winning rapper, singer, producer, actress and former member of the R&B group Sista. With sales of over seven million in the United States alone she is the only female rapper to have six albums certified platinum by the RIAA and has worked extensively as a producer for many other artists along with her childhood friend Timbaland.

Elliott is one of the first female hip hop superstars, known for a long series of hits including "The Rain (Supa Dupa Fly)", "Hit 'Em Wit Da Hee", "Get Ur Freak On", "One Minute Man", "Work It", and "Lose Control". In addition she has received recognition as one of the most successful songwriters of the modern music era, having crafted a number of hit records for artists such as Aaliyah, 702, Total, Ciara, Nicole Wray and Tweet, often with production-partner and childhood friend Timbaland. She was the third female rapper to ever go Platinum, behind Lil' Kim and Da Brat.

Born in Portsmouth, Virginia, she began her career in the all-girl R&B group, Sista in 1993. Eventually, the band folded and Elliott began her career as a solo rapper. Since the early 1990's, Elliott has won six Grammys, recently scoring one for her video of "Lose Control."

Other releases are 'Teary Eyed' and 'We Run This', and the last of these two songs will be the main single of the new greatest hits album titled 'Respect M.E.: Best Of' featuring 17 tracks from her six albums.

WTF (Where They From) (Feat. Pharrell Williams)

Wtf (Where They From) (CDS)