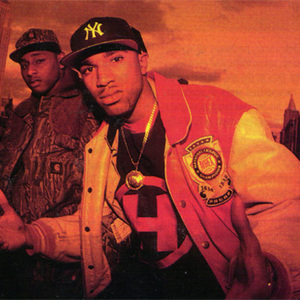 Capone-N-Noreaga (C-N-N for short) is a hip hop duo that consists of Capone (Kiam Holley) and N.O.R.E. (Victor Santiago). The two grew up in the housing projects of Queensbridge and Lefrak City (both in Queens, New York), and met each other in jail in 1992 while doing kitchen duty. In 1996, they signed to "Penalty Records" in a deal with "25 to Life" records (Tragedy Khadafi's label). They were also featured as "Unsigned Hype" in The Source magazine.

In 1996, they signed to "Penalty Records" in a deal with "25 to Life" records (Tragedy Khadafi's label). They were also featured as "Unsigned Hype" in The Source magazine. In 1997, C-N-N released their debut trend-setting album, The War Report. With exquisitely dark tracks crafted by Lord Finesse, Havoc (of Mobb Deep), Clark Kent, and a number of other acclaimed producers, The War Report became an instant classic. The unique chemistry of Noreaga's unorthodox lyrcal delivery combined with Capone's street-wise slang, established the duo as a household name within the Hardcore hip hop community.

After Capone returned from another stint in jail in 1999 the group then released The Reunion featuring the single "Ya'll Don't Wanna". The album struggled to go gold, due to the lack of promotion from Tommy Boy Records, and suffered from mixed reviews. In addition, Capone was sent back to prison right before the release further hurting promotion. Soon after in 2001, Capone-N-Noreaga jumped ship to powerhouse label Def Jam. Because Tommy Boy retained the trademarks to the names "Capone-N-Noreaga" and "Noreaga", the group was forced to shorten its name to C-N-N, and Noreaga was forced to bill himself as N.O.R.E. for his solo work. They recorded a new album in 2003 called The Religion, with a lead single, "Yes Sir", that was issued on mixtapes and promoted by a video. The single failed to make an impact, and the album was shelved.

In early 2005, Def Jam released Capone from his contract while retaining Noreaga, leaving the group's status in disarray. Capone released his debut album "Pain, Time, and Glory", in 2005.

In 2009 the duo reunited to release Channels 10 and has since then released The War Report: Report to War.

The War Report 2: Report The War

The Best of Capone-N-Noreaga