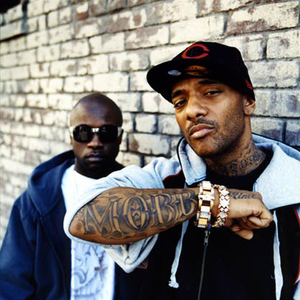 Mobb Deep is a hip-hop duo made up of Havoc and Prodigy. Both members are natives of Queensbridge, New York; located in Long Island City. They are perhaps most famous for their landmark album, The Infamous, and the accompanying hit single, Shook Ones Pt. II. 1992?1994: Early Career Prodigy and Havoc met one another while attending the prestigious High School of Art & Design in Manhattan. Coming from similar backgrounds, the duo broke into the rap game in 1992.

Prodigy and Havoc met one another while attending the prestigious High School of Art & Design in Manhattan. Coming from similar backgrounds, the duo broke into the rap game in 1992. Growing up in hostile environments that included the prevalence of poverty, drugs, and gang violence, Mobb Deep attempted to express their life experiences through rapping circa 1992. Before Havoc and P were known as Mobb Deep they were a couple of teenaged rappers known as Poetical Profits. The world first heard of them via the Source's Unsigned Hype column and this is the demo track that was quoted in that feature. The song would later see the light of day on their debut LP Juvenile Hell.

"Flavor 4 The Non Believers" (demo version) They released their first album, Juvenille Hell, in 1993. At a time when East Coast hip hop was dominated by the jazziness of A Tribe Called Quest and De La Soul, and the Afro-centric stylings of Brand Nubian and Public Enemy, their style of music eschewed the popular conscious hip hop of the time, and reflected the harsh climate of New York City in the late-1980s and early-1990s. Because both Prodigy and Havoc were still in their teens at the time of their debut, many were surprised by the violent nature of the album. Although the album was not well-received by the public, it displayed the raw talent of the duo; the unique chemistry of Prodigy's lyrical delivery combined with Havoc's melancholy beats. Through this unique style, the duo were signed by Loud Records, and began recording their sophomore album, The Infamous, in 1995, which would establish the duo in the Hardcore hip hop community.

Following its release, The Infamous became perhaps one of the most influential hip hop albums of the East Coast hardcore rap genre. Still at a young age, the duo powered themselves to the top of the hardcore rap scene through their straight forward narration of street life. As with their first lyrical production, Mobb Deep portrayed the struggles of living in New York City's Queensbridge. Their production also was noticed as the beats were often hard hitting and direct, a testament to Havoc, who produced the duos' tracks almost exclusively throughout their careers. Furthermore, the hit single Shook Ones Pt. II, received acclaim as one of the greatest rap songs ever. Their third album, Hell On Earth was released in 1996, debuting at number six on the Billboard album chart. The album continued their portrayal of harsh street life, while further pushing them to the forefront of the hardcore rap scene, along with contemporary East Coast rappers such as Notorious B.I.G., The Wu-Tang Clan collective, Jay-Z, and fellow Queensbridge associate, Nas.

In 1999, the duo released the highly anticipated Murda Musik album. Despite extensive bootlegging (nearly thirty songs of unreleased material leaked onto the internet) and countless delays, the album debuted at number three on Billboard and quickly went platinum ?further highlighted by the popular single, Quiet Storm. Shortly afterwards, Prodigy released his long awaited solo album H.N.I.C (2000), in which the rapper collaborated with other artists and producers (including The Alchemist).

Some time after the release of Murda Muzik, rapper Jay-Z, spoke out against the duo, leading to an increase in publicity. At the Hot 97 Summer Jam show of 2001, Jay-Z performed the freestyle, "Takeover", which he later re-recorded for the The Blueprint LP, dissing Prodigy. He also revealed photographs allegedly of Prodigy wearing a dance leotard in 1988. Mobb Deep subsequently released Infamy in 2001. The album marked a major stylistic change that saw the duo move away from the raw, minimalist, stripped-down beats of their hardcore roots, towards more commercial fare with such songs as Hey Luv. This transition fostered accusations of "selling out" ? upsetting many long-time fans who did not wish to see them veer away from their original style. Although this stylistic adjustment opened up Mobb's audience to a wider variety, many critics and fans credit Prodigy's feud with Jay-Z with damaging Mobb Deep's gangster image and record sales (most evident when comparing the platinum-selling Murda Muzik to Infamy barely reaching the gold status). Not to be fazed, Prodigy noted that his lifelong bout with sickle cell anemia and his beef with Jay-Z had changed his outlook.

In 2003, the group split with Loud Records and released The Murda Mixtape which proclaimed "Free Agents" on the cover, addressing the group's split with Loud and search for a new label. Jive Records signed the duo later in the year and subsequently released Amerikaz Nightmare in 2004, which was seen by the general rap audience as a weaker release by the two - resulting in poor sales and the subsequent dropping of the duo from Jive.

In the spring of 2005, it was announced that the duo signed with G-Unit Records. This came as a surprise to many, as 50 Cent aimed a sly diss at them on the "Piggy Bank" track. The duo made it known that this was not the case as Havoc stated in an interview, "Mobb Deep isn't gonna change and when we first got here 50 was like, 'Listen, I want y'all to keep doing what you been doing.' That's it." 50 Cent has a connection to the duo, as he grew up in nearby Jamaica, Queens and also has used Havoc as a producer for several different beats. The relationship became deeper than business as the Mobb and 50 Cent got tattoos to pledge their loyalty to each other. Prodigy has the words "G-Unit" tattooed on his right hand and 50 has "Mobb Deep" tattooed on his wrist. Upon signing to G-Unit, both Prodigy and Havoc were given new Porsches, for two artists who have received very little monetary compensation in the past.

They currently have recorded their album, titled Blood Money which was released on May 2, 2006. It features G-Unit members 50 Cent, Lloyd Banks, Tony Yayo, and Young Buck. This marks their seventh release and has vaulted the duo into the hip-hop spotlight. As one of the most recognized names in hip-hop, it is hoped that G-Unit will help Mobb Deep attract a new fanbase. As Havoc stated shortly after the deal, ?As an artist, you want to be able to reach the furthest audience as you can. We put in hard work on our previous albums and still hit our core fan base. The difference this time around is that more people will hear this product this time.? Despite this, many of the Mobb's longtime fans are skeptical as G-Unit is known for their mainstream crossover music, and fear that Mobb Deep will conform to this style.

Early on, Mobb Deep gained their critical acclaim for a dark, dynamic, grimey sound with haunting melodies--Havoc's production--that to many represented "street" in a way not done by many or any before. Additionally, Prodigy's penchant for starting off a verse with an attention-grabbing line, writing compelling rhymes based heavily on Queensbridge slang, and a rambling but clear delivery appealed to fans on the lyrical aspect.

For some time, Prodigy was the star MC of the duo, Havoc sounding less focused on the lyrical aspect and more on production. This continued until The Alchemist was brought in to do a few beats for each album, after which Havoc seemed to begin concentrating more on his verbal prowess, slowly developing his own style. After the beef with Jay-Z, Prodigy changed his style, rhyming words less and slowing down his delivery, while Havoc increasingly contributed more to the rhyme end of the duo. After being on independant labels, such as LOUD, and then a larger label JIVE, styles from the grimy, gritty styles from the QB duo changed greatly, much to the despair of the mainstream fans, never fully recovering from the Jay-Z beef, they were forced into the limelight, and after releasing the street wood effort of Infamy, never reclaiming the status of the best kept secret. Signing with G-Unit seems to have worsened their career and Blood Money, their first album released on G-Unit, only sold approximately 110,000 in its first week, coming in at #3 on the Billboard 200.

Survival Of The Fittest (EP)

The Safe Is Cracked

Life Of The Infamous The Best Of Mobb Deep

When You Hear The