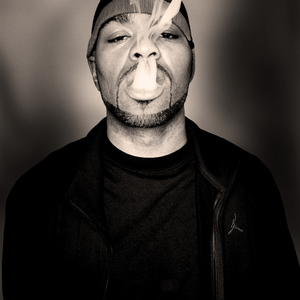 Method Man (born Clifford Smith, April 1, 1971 in Hempstead, Long Island, New York) is an American rapper and member of the hip-hop collective, Wu-Tang Clan. He is also well-known for his work both as a solo artist and with frequent collaborator Redman, as well as for recent forays into acting. Method Man spent a childhood split between separated parents in Long Island and Staten Island, and in an apparent precursor to his career in hip hop was introduced both to playing drums and to poetry by his father.

Method Man spent a childhood split between separated parents in Long Island and Staten Island, and in an apparent precursor to his career in hip hop was introduced both to playing drums and to poetry by his father. Not only was Method interested in music, he was also fascinated by comic books and particularly Ghost Rider, a fascination which manifested itself years later in several of his many rap aliases. His pre-hip hop adult life was mostly split between drug dealing and low-paid jobs (including a stint working at the Statue Of Liberty, along with future Wu-Tang colleague U-God). After becoming well known on the streets for his rhyming abilities, he joined with 8 friends to form the Wu-Tang Clan in the early 1990s.

Since the Wu-Tang Clan's ascendancy to hip hop stardom, Method Man has always been one of the most visible members of the collective. He was one of only two of the group to get a solo song on the group's debut album Enter the Wu-Tang: 36 Chambers and he was the first to release a solo album under the Clan's unusual contract which allows its members to release albums under any record label (Method chose to sign with legendary rap label Def Jam). Method Man's solo debut, Tical (1994) was critically acclaimed and extremely popular, entering the American charts at #4 and eventually selling in excess of one million copies.

He soon collaborated with Mary J. Blige and Redman with a series of hit singles, one of which (the Blige duet "I'll Be There For You/You're All I Need To Get By") won a Grammy, before recording the second Wu-Tang album, Wu-Tang Forever.

His second solo album was Tical 2000: Judgement Day (1998), which was heavily influenced by the apocalypse theories surrounding the forthcoming end of the millennium, and which featured a vast amount of guest appearances, from his fellow Clansmen to Lisa "Left Eye" Lopes, D'Angelo, Chris Rock, Mobb Deep, Redman and even Donald Trump. The album sold even better than his first, though reviews were mixed and its long running time and the abundance of between-song comedy skits were criticised by many.

Method Man then toured with Jay-Z and recorded Blackout! with Redman, a light-hearted, fun record with an EPMD-evoking emphasis on funky beats and the mischievous wit and cool flows of the two MCs.

In the twenty-first century, Method Man forged a successful career in acting. As well as his 1998 appearance in the film Belly along with fellow rappers Nas and DMX, Method has also appeared in 187 Oz, How High (a stoner film with Redman), The Wire, My Baby's Daddy, Garden State and Soul Plane, while continuing to record with the Wu-Tang Clan. He also co-starred with Redman in his own Fox sitcom called Method & Red, however after only a short time on the air the show was put on hiatus and never returned. Method Man later complained in the press about Fox's influence on the show's style, claiming that "there's been too much compromise on our side and not enough on their side" and bemoaning the network's decision to add a laugh track.

In 2004, Meth released his third album Tical 0: The Prequel, which spawned a successful single in "What's Happenin" with Busta Rhymes, but was poorly received both by critics and fans. There was trouble even before the album's release when Method apparently complained to the press about excessive interference from Def Jam over the album's beats (Meth supposedly desired more input from Wu-Tang leader RZA). On its release, many fans and critics were taken aback by its strong "mainstream" or "commercial" sound, highlighted by the guest appearances of pop-rap stars of the time Missy Elliot, P. Diddy and Ludacris. However, the album sold reasonably well, selling more than any of the other Wu-Tang solo projects released at around the same time. There was good news in early 2005 for fans who were disappointed with The Prequel as Method Man announced that a new RZA-produced album would be released later in the year. The album ultimately never materialized in 2005, though RZA and Meth continue to work on the album and are now aiming for a mid-2006 release date.