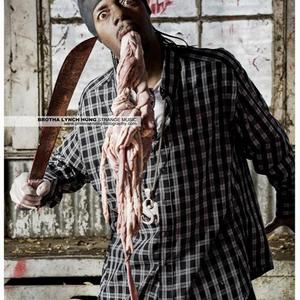 Brotha Lynch Hung (born Kevin Mann) is an MC and producer from Sacramento, CA who began rapping at 13. Lynch Hung's lyrics are notorious for featuring highly explicit themes, including murder, rape and cannibalism. Lynch Hung debuted with the 1993 album 24 Deep, which featured stories of the struggles involved with being affiliated with a local street gang in Sacramento's "Garden Blocc." Lynch Hung has also helped Master P with albums like I'm Bout It]], E-40's Southwest Riders and Mr. Serv-On's Life Insurance.

Lynch's first known work is his production for X-Raided's "Niggas In Blacc" (91) and the callaboration album "Nigga Deep" with Triple Sicx Bounty, released in 1992 and re-released in 1998.

Some listeners argue that Lynch Hung's 24 Deep album defines his musical style, but Lynch Hung has said in interviews and online forums that it does not.

Lynch Hung's second album Season of Da Siccness in 1995 proved to be the one of the most gruesome and mysogynistic Gangsta Rap albums ever released, graphically chronicling a life of drug use and sale, promiscuity, ultra-violence, rape, infanticide, and supposed cannibalism. This is Lynch's most commercially successful album, as it has now achieved gold album sales status.

Lynch Hung's lyrics are described as sicc -- having the same meaning as the word sick but utilizing the double "C" which is characteristic of local Crip gangsters (loccs) in Sacramento, CA and other parts of California. Lynch has stated in his song "24 Gone" that he himself is a Crip, residing in Crip areas of Sacramento has had an influence on his lyrics. He has been in gang confrontations, and he was shot once. He describes his real life experiences in his lyrics. He has since released Loaded in 1997. The next Lynch album was released in 2000 called EBK4 after a dispute with Black Market Records. The label allegedly restricted his creativity by featuring artists on the album against Lynch's will. Lynch asked his fans not to buy the album. He said "I don't care how they get it just don't buy it or steal it".[citation needed] Brotha Lynch released the DVD of Now Eat in 2000, which features a bloodthirsty and cannibalistic Lynch who goes on a rampage, killing and eating many people.

Lynch released Blocc Movement and Virus in 2001, Appearances: Book 1 in 2002, and in that same summer of 2002 he released his first DVD, Plague. Lynch's newer work includes Lynch by Inch: Suicide Note and Uthanizm in 2003, and the Now Eat DVD in 2000. In 2006 he released a collaboration with rapper MC Eiht entitiled "The New Season."

Dinner And A Movie