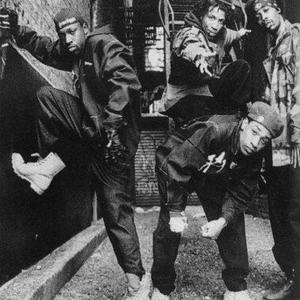 Gravediggaz was a hip-hop group from New York City. They were well-known for their dark sense of humor and abrasive, menacing soundscapes. The group was formed in 1993 and was effectively a "supergroup", bringing together Prince Paul (formerly producer with De La Soul and Stetsasonic), Frukwan from Stetsasonic, Too Poetic from the Brothers Grimm, and RZA from the Wu-Tang Clan (who at the time of Gravediggaz' formation had only just released their first album). The group are widely credited as being one of the most influential and pioneering groups in the small hip hop subgenre of horrorcore.

The group's first album was originally titled Niggamortis; however, the potentially risqu? title was changed to 6 Feet Deep for the American market (European versions of the album retained the original title, and also included the bonus track "Pass The Shovel"). Released on August 9 1994, 6 Feet Deep was a mix of over-the-top ghoulish black humor, cartoonish violence reminiscent of the Geto Boys, esoteric references to the Five Percent Nation of Gods and Earths, and gritty, foreboding beats reminiscent of RZA's work with the Wu-Tang Clan. The four members adopted Gravedigga alter-egoes for their work with the group: RZA became RZArecta, Poetic became the Grym Reaper, Prince Paul became the Undertaker, and Frukwan became the Gatekeeper. The three rapping members (without Prince Paul) released a collaborative EP titled "The Hell EP" with UK trip hop artist Tricky in 1995.

The second full-length Gravediggaz album, The Pick, The Sickle and the Shovel (released in 1997) was considerably more mature and socially conscious than 6 Feet Deep, and used calmer and more intricate production. Prince Paul played a considerably smaller role in the making of this album, with many of the production duties now taken care of by RZA's Wu-Tang associates (including True Master and 4th Disciple).

The Gravediggaz' third album, Nightmare in A Minor, was completed in 2001 and only featured two of the original members, Poetic and Frukwan. This album was their darkest work yet, including many references to Poetic's struggle with colon cancer as well as focusing on the more apocalyptic themes within the teachings of the Five Percent Nation. Although RZA did not take part in the making of the album, some Wu-Tang Clan affiliates such as 4th Disciple, True Master and Beretta 9 were involved. The album was mostly produced by Poetic and Frukwan themselves.

Poetic finally succumbed to cancer in July 2001, two months before Nightmare in A Minor was to be released. Frukwan stated in an interview not long after Poetic's death that a new album using leftover Poetic material would be released. The Album has been released in March 2004 and titled '6 Feet Under'. It featured mostly solo tracks by Frukwan and a few unreleased Poetic songs.

The Pick, The Sickle And The Shovel