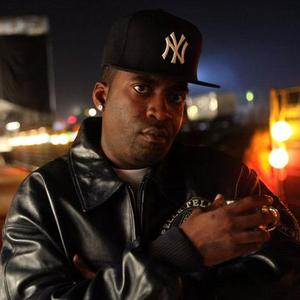 Marvin Bernard, better known by his stage name Tony Yayo is an American rapper and member of the hip hop group G-Unit. Though his appearances on mixtapes announced his return on the street level, it was not until the release of "So Seductive" that his return received wide recognition. In August, Tony Yayo released his debut, Thoughts of a Predicate Felon. Tony Yayo has confirmed that work is in progress for his second studio album.The album was originally called Godfather of the Ghetto, then I Am 50's Tax Write-off, finally leaving Tony Yayo undecided on a title.

Though his appearances on mixtapes announced his return on the street level, it was not until the release of "So Seductive" that his return received wide recognition. In August, Tony Yayo released his debut, Thoughts of a Predicate Felon.

Tony Yayo has confirmed that work is in progress for his second studio album.The album was originally called Godfather of the Ghetto, then I Am 50's Tax Write-off, finally leaving Tony Yayo undecided on a title.

Tony Yayo is known to involve himself in the G-Unit and The Game feud. He has been known to denounce The Game's street credibility in various interviews and diss songs. On his mixtape G-Unit Radio Pt.23: Finally Off Papers, Tony Yayo made some hits towards The Game in the track Mo Money, Mo Problems by poking fun about his album sales being considerably less without the help of 50 Cent or G-Unit. In an interview with MTV, Tony Yayo aired his feeling towards many rappers who he "doesn't believe".

Tony Yayo openly involves himself in 50 Cent's Feuds. The most recent example of this would be the 50 Cent vs Cam'ron Feud. Although he hasn't released a direct diss track towards Cam'ron, he has voiced his opinion through interviews.

This feud took off when Tony Yayo yelled "boring" instead of "balling" (a reference to "We Fly High") backstage at a show where both G-Unit and Dipset were performing.

Tony Yayo later addressed Jim Jones on his mixtape Finally Off Papers (G-Unit Radio Pt. 23) on the track "Mo Money, Mo Problems". He yells "Boring!" in the background to mock Jim Jones as well as shouting other insults towards him at the end of the track.

Tony Yayo and Jim Jones have settled their feud[when?] and have even performed together. They also both appeared on BET's "Rap City" which 50 Cent was hosting

Along with 50 Cent, Yayo was arrested on December 31, 2002 for weapons possession. When police discovered that Yayo had an outstanding warrant for a previous such charge, Yayo was sentenced for bail jumping and spent all of 2003 in prison.Yayo served time in the Lakeview Shock Incarceration Correctional Facility and was paroled on January 8, 2004. The next day, he was arrested for possessing a forged passport and served time in federal prison until May 25, 2004. When Yayo was incarcerated, G-Unit began a campaign called "Free Yayo".

On March 24, 2007, Tony Yayo was arrested for allegedly assaulting the 14 year-old son of The Game's manager, Jimmy "Henchmen" Rosemond. Tony Yayo and 50 Cent were accused of approaching the child, with members of their entourage, and pushing him against a nearby wall. This was when Tony Yayo reportedly slapped the boy several times and said "Fuck Czar Entertainment". Tony Yayo has pleaded "not guilty" and 50 Cent has since proven his innocence with video footage showing him at his Connecticut mansion at the time of the alleged incident.

Tony Yayo made his first court appearance on the morning of April 25, 2007 in New York. The case was adjourned to July 24. Tony Yayo's Lawyer has expressed his belief that Yayo is innocent and commented on the situation in an interview with MTV.

After a thorough investigation, I steadfastly and adamantly state to you that Tony Yayo did not slap anyone," Leemon said. "I am hopeful that when [authorities] complete their investigation, they will come to the same conclusion. Yayo, as a father, understands the allegations and would never do anything to harm a child.

On April 18, 2007, the house of Tony Yayo's mother was "sprayed with bullets". The attack is believed to be in connection with Tony Yayo's recent arrest.

On July 24, Tony Yayo attended a court hearing regarding his alleged assault. The prosecution offered him a nine-month prison sentence if he pleaded guilty which he rejected.

One of the men from Tony Yayo's entourage, a co-defendant, admitted that it was him, not Yayo who slapped Rosemond, on January 10, 2008.

So Seductive / Live By The Gun

Thoughts Of A Predicate Felon