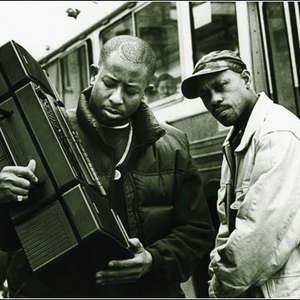 Gang Starr was an influential American hip-hop duo, composed of late rapper Guru (Backronym for Gifted Unlimited Rhymes Universal, real name Keith Elam) and DJ Premier (real name Chris Martin). Premier originally from Houston and Guru from Boston, but they were based in and represented Brooklyn, New York, epitomizing the New York City hip-hop sound. The entirety of Gang Starr's catalog, especially Step In The Arena (1991) ,Daily Operation (1992), and Hard To Earn (1994) are well-respected among critics and hip-hop heads alike.

Though these titles helped establish the duo as one of New Yorks foremost hip hop acts during the early to mid 90's it was their 1998 album Moment of Truth that would prove to be their most influential record to date. Despite their legendary status, this was also their only album to sell gold.

Their track "Jazz Thing", featured on the soundtrack to Spike Lee's film Mo' Better Blues, helped establish the sound of jazz-hop, although they themselves consider their sound solely straight hardcore hip hop.

The group was founded in 1987 with Guru, DJ 1,2 B Down, Mike Dee and various producers, such as Donald D, J.V. Johnson or DJ Mark The 45 King. In 1987 and 1988 they released three 12" vinyl singles on the legendary Wild Pitch label, and in 1989 Guru and DJ Premier (then working under the name Waxmaster C) met for the first time. In the same year they released their first single "Words I Manifest" and went on working together as a group for six albums, a 2 CD "greatest hits" compilation and numerous singles and soundtrack contributions.

On September 1, 2005, Guru revealed in an interview with the hip hop online magazine sohh.com that the group doesn't exist anymore, but that it has ended instead of breaking up. This finally cleared up the rumors that came up first on the European Gang Starr tour in 2003/2004 when DJ Premier suddenly went back to the US and Guru continued touring under the group's name with another DJ. However, in an December 21, 2005 interview with the online magazine allhiphop.com, DJ Premier has denied that Gang Starr is history; he said it's rather a long break than a real break up. In a more recent interview from April 20, 2006, with the online magazine hoodstars.net, Guru stated he would not work with his previous partners anymore. In a newer interview he said that "Gang Starr has reached the peak" and that he is out of the project.

Guru passed away after a long battle with cancer on April 19, 2010.

One Of The Best Yet

Ahead Of The Game