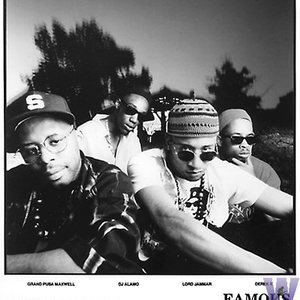 Brand Nubian is a hip hop group from New Rochelle, New York, consisting of three MCs; Grand Puba (born Maxwell Dixon, March 4, 1966), Sadat X (formerly Derek X, born Derek Murphy) and Lord Jamar (born Lorenzo Dechalus, September 17, 1968); and two DJs, DJ Alamo and DJ Sincere. Their debut album One for All is one of the more popular and acclaimed alternative hip hop albums of the 1990s, known for socially conscious and politically charged content inspired by the teachings of the Nation of Gods and Earths.

Their debut album One for All is one of the more popular and acclaimed alternative hip hop albums of the 1990s, known for socially conscious and politically charged content inspired by the teachings of the Nation of Gods and Earths.

1989-1992
Brand Nubian formed in 1986 after Grand Puba's original group, Masters of Ceremony, split up. Its first single, "Brand Nubian," was released in 1986. Signed to Elektra Records by A&R man Dante Ross, its debut album, One For All, was released in 1990. Generally acclaimed, the album drew fire for militant Five-Percenter rhetoric on tracks such as "Drop the Bomb" and "Wake Up." The controversy helped sales, though the album was still not a great commercial success. To date, the album has sold 350,000 units. A version of the Fab Five Freddy-directed video for the single "Wake Up," featuring a Black man in white-face makeup, was also banned from MTV. On MTV and from official WEA sources, this image was replaced by a Baptist preacher. The singles "Slow Down," "All for One," and "Wake Up" all became hits on Billboard's Hot Rap Tracks chart in 1991.

Shortly after its debut release, Sadat X and Lord Jamar began having problems with Grand Puba, which caused him to leave the group, along with DJ Alamo, to pursue a solo career. Lord Jamar and Sadat X enlisted DJ Sincere to join the group in 1992. The same year, Puba released his solo debut, Reel To Reel, which featured the hit single "360&deg; (What Goes Around)".

Later in 1992, the Puba-less Brand Nubian released a hit single of its own, "Punks Jump Up to Get Beat Down". The track was met with controversy over alleged homophobic content, referencing the Sadat X line "I can freak, fly, flow, fuck up a faggot/I don't understand their ways, I ain't down with gays." Despite the controversy, the single charted on the Billboard Hot 100 at number 77. Later versions omitted the line, including the version on the greatest hits compilation The Very Best of Brand Nubian.

1992-1996
In late 1992, the crew released its second album, In God We Trust. "Punks Jump Up to Get Beat Down" was included on this release, as well as the number-92 Hot-100 single, "Love Me or Leave Me Alone." The effort sold moderately well, fueled by the crew's continuing controversy. Also in 1993, the group contributed a track for the Menace II Society soundtrack, titled "Lick Dem..........."

The group's next release, Everything Is Everything, was issued in November 1994. The controversy kept growing, with further accusations of the group's music being analogous to hate speech. The album received very mixed reviews and mediocre sales, despite the top-40 Hot Rap Tracks singles "Word Is Bond" and "Hold On (feat. Starr)." In 1995, the group broke up, left Elektra, and launched solo careers in music and television. That year, Puba released his second solo effort, 2000, featuring another Billboard Hot 100 single, "I Like It (I Wanna Be Where You Are)." Sadat X released his first solo effort, titled Wild Cowboys (Loud/RCA/BMG Records), in 1996.

1997-2000
The original members reunited in 1997, contributing a song to the Soul In The Hole soundtrack, titled "A Child is Born". Another song, "Keep It Bubblin'," appeared on the 1997 Money Talks soundtrack. In 1998, the four original members returned with the album Foundation on a new label, Arista/BMG Records. The album received wide acclaim and featured contributions from a larger group of producers, including DJ Premier, Buckwild, Lord Finesse, and Diamond D. The lead single "Don't Let It Go To Your Head" became, at number 54, the group's highest-charting single on the Hot 100. In 2000, the crew once again teamed up with Buckwild of D.I.T.C. and released the underground single "Rockin' It," before the members continued their individual pursuits. Sadat X released a solo EP in 2000, The State of New York vs. Derek Murphy, on Loud/Relativity Records.

2001-present
Puba released his third solo effort, Understand This, in 2001, which received little attention despite featuring his fellow Brand Nubian members. The original members reunited once again in 2004 for the release of its fifth album, Fire In The Hole, their first release on an independent label, Babygrande Records. The album received mixed reviews and sold below expectations. Sadat X released another solo effort in 2005, titled Experience and Education, receiving mostly positive reviews. Jamar also furthered his acting career, recently appearing on an episode of The Sopranos, as well as episodes of Oz, Third Watch, and Law & Order. Lord Jamar released his first solo album, The 5% Album, June 27, 2006, on Babygrande Records. Sadat X's third full length album, titled Black October, was released October 2006. In 2007 the group released an album titled Time's Runnin' Out.

Fire In The Hole

In God We Trust