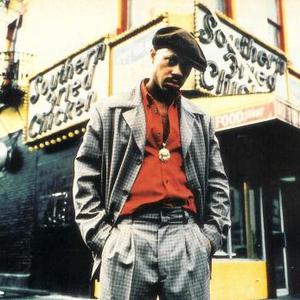 Guru (July 17, 1961 ? April 19, 2010) was one half of the legendary hip hop duo Gang Starr and an accomplished solo artist. Guru, an acronym for Gifted Unlimited Rhymes Universal, originally began his hip hop career in Boston but due to lack of local support moved to New York where Gang Starr then blew up. Guru was well known for his smooth voice; socially conscious and hardcore lyrics; and an effortless, confident delivery.

Founded in 1987, Gang Starr built a sizable following in the early 90's, releasing classic albums like Step In The Arena (1991) and Daily Operation (1992). Guru's lyrical style was based on battle rhymes delivered smoothly, modestly, and with sly wit; he typically avoided using overwhelming charisma, focusing instead on his rhyming ability. Over the years he even took on younger rappers, including Jeru The Damaja, as proteges. He is credited, along with DJ Premier, for the executive production of Jeru's debut, The Sun Rises In The East (1994).

Besides Gang Starr, his Jazzmatazz and solo albums, Guru collaborated with countless artists since the early 90s. Not only in hip-hop, but also with artists from various genres such as pop, electronica/dance, acid jazz, and even brass bands.

His "first proper solo album", in his own words, was Version 7.0: The Street Scriptures (2005), released with the help of producer and new backup MC/producer Solar. The album reached #1 on the college hip-hop charts, but was a failure with both fans and critics. It still managed to sell relatively well for an independent release.

Guru's latest project is the fourth installment in the Jazzmatazz series, entirely produced by Solar. It was released in early June 2007 and received good reviews and comments from fans.

Jazzmatazz - Back To The Future The Mixtape

The Best of Guru's Jazzmatazz