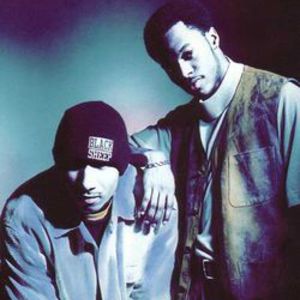 1) The first is an alternative hip-hop duo from Queens, New York, consisting of Andres "Dres" Titus and William "Mista Lawnge" McLean. They were a part of the Native Tongues Posse, which included Jungle Brothers, A Tribe Called Quest and De La Soul. They debuted in 1991 with the hit song "Flavor of the Month" and later released their first album, A Wolf in Sheep's Clothing, which gained them praise and recognition in the hip-hop community for its unique rhythms and intelligent lyrics.

A Wolf in Sheep's Clothing charted three times on the Billboard Hot Dance Music/Club Play chart in 1992 with "The Choice Is Yours" (#9), and "Strobelite Honey" (#1). Black Sheep were also featured on Vanessa Williams' album, Work To Do (#8).

Black Sheep was also one of the first groups to parody gangsta rap (still in its infancy when A Wolf In Sheep's Clothing was released) in the hilariously over the top "U Mean I'm Not." It describes in cringing detail a dream one of the members had about shooting his sister for staying in the bathroom too long, and his mother for breaking his egg yolk while cooking breakfast. When he is roused from his sleep, he tells his friends in a bewildered, almost frightened voice, "I dreamed that I was... hard."

The group's second album, Non-Fiction, was seen as not living up to the group's well-established talents. Due to virtually no promotion and a generally poor reception, the album managed only lackluster sales. Titus and McLean would separate soon afterwards to attend to various independent projects. In 2000, they reunited to record a track for the movie Once in the Life. Dres is currently planning to release a new mixtape titled 8WM under the name Black Sheep, scheduled for release in the summer of 2006. Mr. Lawnge, now known as Mr. Long, has distanced himself from this new release.

Dres was featured on the second Handsome Boy Modeling School album, White People, on the track "First...and Then".


2) The second band who go by the name Black Sheep. They are a Hardcore Punk/Ska band from Mouscron, Hainaut, Belgium. Their influences include Leftover Crack, Choking Victim, Capdown, Comeback Kid, No Cash and The Filaments.
The band are comprised of:
VANKOU : Vocals - Guitar
LOUL : Drums - Vocals
NOAR : Guitar - Vocals
VAYES : Bass - Vocals
Check them out at:
http://www.myspace.com/bxsbelgium
http://www.bxsmusic.be/


3) The third band named Black Sheep is a Classical Rock three piece band based in York, U.K. Who's most interesting feature is that their drummer is also their vocalist. Although a musicially brilliant band they have yet to break out of their genre and play within set guidelines. They can be found on last.fm under the name Black Sheep Experience


4) The forth band is an Heavy Metal band from the California. They put out an album titled Trouble in the Streets, in 1985.


5) The fifth band in an underground Black Metal/Noise band that has formed in 2002 and has a demo and a split album out.


6) The sixth band is a Celtic Rock music group based in the South of England. Their first (and only at time of writing) album is called Wrecking Reels. See their website: http://www.blacksheepband.co.uk/


7)The seventh band is a Hard Rock,Classic Rock From Thessaloniki - Greece/Hellas.
They participated in Schoolwave 2008 and have at least one song, named "Enjoy The Ride"

8) Julian Cope's latest ensemble, featuring the likes of Acoustioka and Christophe F. There sole release so far is Kiss My Sweet Apocalypse, available in (very) different versions on CD and vinyl.

Silence Of The Lambs "The Instrumentals" Vol. 1

From The Black Pool Of Genius

A Wolf In Sheep's Clothing