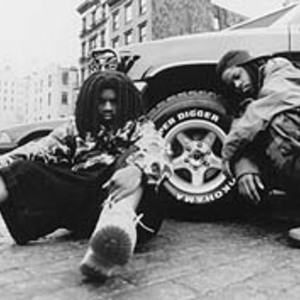 The duo ?Das EFX? emerged in 1991 from the well-established East Coast Hip-Hop scene. The group is composed of Willie ?Skoob? Hines and Andre ?Krazy Drayz? Weston. With their first album ?Dead serious? released in 1992, the group creates a mini-revolution by using an ultra-fast rap associated with funky beats. The album was a commercial success. The following year, Das EFX released their second LP ?Straight up Sewaside", ?Hold it down? in 1995, and ?Generation EFX? in 1998. Their last album was "How We Do" which was released in 2003.

-----------
Das EFX's wildly playful, rapid-fire stuttering -- dense with rhymes and nonsense words -- was one of the most distinctive and influential lyrical styles in early-'90s hip-hop. While the duo completely rewrote the MC rule book, they themselves were increasingly pegged as a one-dimensional novelty the longer their career progressed, despite watching elements of their style creep into countless rappers' bags of tricks. Krazy Drazyz (born Andre Weston; Teaneck, NJ) and Skoob (born Willie Hines) were both raised in Brooklyn, but didn't begin performing together until they met at Virginia State University in 1988. Removed from an active music scene, the two were free to develop their most idiosyncratic tendencies; they started making up gibberish words (anything ending in "-iggity" was a favorite) that added loads of extra syllables to their lines, and wove plenty of pop-cultural references into the tongue-twisting lyrical gymnastics that resulted. Das EFX caught their big break when they performed at a talent show judged by EPMD; though they didn't win, EPMD was impressed enough to offer them a deal, and the duo became part of the Hit Squad crew of prot?g?s.

Signing to the East West label, Das EFX began work on their debut album, commuting between Virginia and New York and mailing tapes to EPMD (then touring the country) for guidance. Upon its release in 1992, Dead Serious caused an immediate sensation, and is still considered something of a landmark in hip-hop circles. The first single, the instantly memorable signature song "They Want EFX," was a Top 40 pop hit and a Top Ten R&B hit, and helped push sales of Dead Serious past the platinum mark. Wary of being pigeonholed by repeating themselves, the duo slowed down their lyrical flow and downplayed the surrealistic side of their interplay on the follow-up album, 1993's Straight Up Sewaside, which went gold. Around the time of 1995's disappointing Hold It Down, Das EFX found themselves caught in the middle of EPMD's ugly breakup; it led to a three-year absence from recording. By the time they returned in 1998 with Generation EFX, the group was playing more to a devoted but narrower cult audience; they have remained largely silent since. Steve Huey, All Music Guide

Straight From The Vault

The Very Best Of Das EFX