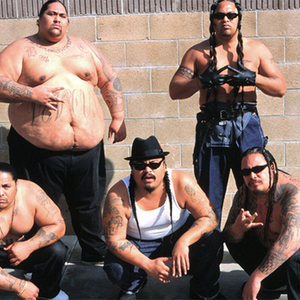 The Los Angeles based Boo-Yaa T.R.I.B.E. are one of the early influential acts from the West Coast rap scene. Emerging from the same era of West Coast hip hop greats such as Cypress Hill and Ice Cube, the Boo Yaa T.R.I.B.E. are one of the more underground legendary acts, but command much respect from the hip hop community and hardcore hip hop fans. They are known for incorporating heavy metal and Funk into their hip hop.

One of the unique aspects of the group that sets them apart from most West Coast acts and hip hop groups is that the brothers can all play musical instruments, making them an interesting live act. They often insist on playing their own instruments on their albums as well as on stage. Introduced to music via the Baptist church, Gawtti, the youngest, explained, " Our father was a minister of a church and we had to learn instruments to play at his services. We'd go in the morning and set up the instruments and play a lot of funk before folk came in."

Despite their religious background, the brothers fell into the local west coast gang lifestyle. They became members of the Samoan Mob Piru Bloods, and eventually all of the brothers had at some point served prison time on drug and/or weapons charges. It was the death of their younger brother, Robert ?Youngman' Devoux, in a 1987 shooting that became the turning point in their lives. The brothers quit the gang-banging lifestyle cold turkey. Godfather explained, "The gangsta way of life came at a high price. At the time me and family was at war with different enemies and he got caught up in the cross fire??y'know, you gotta understand, you grow up in life with your brothers, and even though you're in a war zone you don't think about losing someone, and when it happens to you, you can do two things: you can get madder or you gotta run with it.? This changed all the brothers lives, Gawtti explained "It made us choose whether we wanted to go war or to music. We chose the music because that's what he would have wanted."