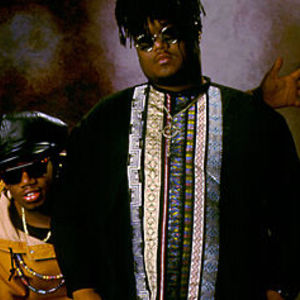 Prince Be began DJing parties and composing songs in ninth grade. Within a few years, he had determined to make a demo tape of some of those pieces with the $600 he had set aside from his after school job as a security guard at a homeless shelter. By then, he and his brother were putting in studio time as P.M. Dawn.

They first approached Tommy Boy Records, the rap music subsidiary of Warner Brothers, with their demo, but they were told that they were too much like alternative hip-hoppers De La Soul, and not hardcore or ghetto, and were turned away. Eventually, Warlock, an independent record label, issued a debut single, "Ode to a Forgetful Mind", in 1989, but it went unnoticed.

The record label that released the single in the United Kingdom, Gee Street Records, found greater success. Gee Street mixed and marketed the song so that it earned considerable attention from music reviewers, and P.M. Dawn found themselves courted not just by Gee Street's head, John Baker, but also by most of the major UK record labels. Gee Street brought the brothers to London in 1990 to record tracks for an album, however, the label found itself facing bankruptcy during the recording. The entire Gee Street operation, along with P.M. Dawn's recording contract, was sold to the highest bidder, Island Records. Island issued a few more singles in the United Kingdom before releasing their debut album, Of the Heart, of the Soul and of the Cross: The Utopian Experience.

Of the Heart, of the Soul and of the Cross featured the international hit "Set Adrift on Memory Bliss", which sampled the Spandau Ballet song "True", and featured a cameo by Spandau Ballet singer Tony Hadley in the music video of the song. "Set Adrift on Memory Bliss" hit #1 the week of November 30, 1991, and holds the distinction of being the first #1 song on the Billboard Hot 100 chart following the introduction of Nielsen SoundScan to the chart. The song also reached #3 in the United Kingdom. "Paper Doll", which was one of the early singles Island released in the United Kingdom, was released in the U.S. as a follow-up to "Set Adrift on Memory Bliss," and peaked at #28 in early 1992. "Paper Doll" is said well over 100 times in the song, which makes it second only to MC Hammer's "Pray" which holds the record for the most times a title is repeated in an U.S. Top 40 hit (147).

With the success of their debut album, the band embarked on a world tour. During this world tour, a statement Prince Be made in Details magazine led Boogie Down Productions' KRS-One and his crew to storm the stage during a P.M. Dawn concert, forcing the group off the stage and performing three BDP classics. To warrant this reaction from KRS-One, Prince B had asked, "KRS-One wants to be a teacher, but a teacher of what?" Defending his motives to USA Today's James T. Jones IV, KRS-One remarked, "I answered his question. 'A teacher of what?' I'm a teacher of respect."

In 1992, PM Dawn appeared on the Red Hot Organization's compilation CD Red Hot + Dance, contributing a remix of "Set Adrift on Memory Bliss," "Set Adrift On Memory Bliss (Richie Rich Mix)." The album, featuring George Michael and Madonna among others, was meant to raise money and awareness in support of the AIDS epidemic.

Before releasing their follow-up album, The Bliss Album?? (Vibrations of Love and Anger and the Ponderance of Life and Existence), P.M. Dawn contributed the single "I'd Die Without You" to the 1992 Eddie Murphy comedy Boomerang and its soundtrack. The number one hit was also included on The Bliss Album??, as was the Billboard Top 10 single "Looking Through Patient Eyes".

"Looking Through Patient Eyes" featured backing vocals by Cathy Dennis and sampled George Michael's hit "Father Figure". The music video for the song was shot in a church, and featured Christian images throughout ? most notably, Prince Be wore a T-shirt with "Thank you, Jesus" written across it in black lettering.

The Bliss Album?? also featured the Boy George duet "More Than Likely" and a cover of The Beatles' "Norwegian Wood (This Bird Has Flown)". On a less positive note, the album also included "So On and So On," which led to a 1999 sampling lawsuit. In the lawsuit Batiste v. Island Records, Inc., Paul and Michael Batiste claimed that P.M. Dawn's song "So On and So On" used unauthorized samples from David Batiste & The Gladiators' "Funky Soul". The fifth Circuit Federal Appellate Court found that the Batistes point to no evidence in the record demonstrating that consumers were confused or deceived by either the use of a digital sample of "Funky Soul" in "So On and So On", or the attribution to David Batiste as a co-author of the track. The Batistes' claim that Paul and Michael Batiste were improperly excluded from the liner notes accompanying the album also failed to suggest that consumers were confused, especially because the liner notes do credit the name of the band in which both Paul and Michael Batiste performed.

P.M. Dawn contributed a cover of "You Got Me Floatin'" to the 1993 compilation album Stone Free: A Tribute to Jimi Hendrix. Artists ranging from Pat Metheny to Eric Clapton to Ice-T's Body Count were included.

Their 1995 album Jesus Wept was unable to attain the success of their first two albums. The album's highest charting single was "Downtown Venus", which contained a sample of Deep Purple's "Hush", and reached #48 on the Billboard chart. Also, in 1995, P.M. Dawn was credited with the remix of White Zombie's "Blood, Milk and Sky" (Miss September Mix) on the Supersexy Swingin' Sounds compilation album. In 1996, P.M. Dawn contributed "Non-Fiction Burning" to the AIDS-Benefit Album Red Hot + Rio produced by the Red Hot Organization. In 1998, Prince Be contributed the tracks "Perfect for You" and "Gotta Be...Movin' on Up" to the Marlon Wayans and David Spade comedy Senseless, followed later in the year by P.M. Dawn's fourth album, Dearest Christian, I'm So Very Sorry for Bringing You Here. Love, Dad. It was less successful again, with the album's single, "Being So Not For You (I Had No Right)" being only a minor chart hit. In 2000, they released the compilation, The Best of P.M. Dawn.

Prince Be suffered a massive stroke in early 2005 that left him paralyzed on the left side of his body. Undeterred, P.M. Dawn appeared on NBC's Hit Me, Baby, One More Time, performing "Set Adrift on Memory Bliss", and covered Puddle of Mudd's "Blurry". Despite the fact that Prince Be was still suffering the effects of this stroke, they beat Animotion, Missing Persons, Juice Newton and Shannon to claim the $20,000 charitable prize, which they contributed to the juvenile diabetes foundation, as Prince Be is a diabetic.

Following their appearance on Hit Me, Baby, One More Time, Minutemix decided to leave P.M. Dawn to pursue an interest in a solo career. This led to the introduction of The Doc Of The Dawn-Doc.G, also known as 'Dr.Giggles' or 'Blissboy #2', who is the Cordes brothers' paternal first cousin.

In June 2006, P.M. Dawn commenced a summer tour called "Summer of Bliss, 2006", playing venues across the United States in an effort to promote a new album planned for release in 2007, with a live album also expected to be recorded that year. P.M. Dawn Greatest Hits Live was finally released in early 2010. The Doc Of The Dawn-Doc.G released a new single on May 20, 2011 called "99 Bottle (The Stripe & Goose Song)" on iTunes, Amazon, and other mp3 websites. On May 24, 2011 The Doc Of The Dawn-Doc.G released his first solo album titled The Purr-Script-Shun.

On February 12, 2009, Prince Be had a second stroke and suffered a gangrenous infection in his right leg. As a result of this infection, his leg had to be amputated below the kneecap in December 2009. With Prince Be's blessing, Doc.G continues to tour and perform P.M. Dawn classics and his new material. On May 15, 2010 (Prince Be's 40th birthday), Doc.g performed at the Mall of Asia concert series in Manila, receiving a standing ovation from 50,000 fans and dedicating the performance to the memories of Guru from Gangstarr and Francis M.

Of The Heart, Of The Soul, And Of The Cross: The Utopian Experience

Reality Used To Be A Friend Of Mine

Of The Heart, Of The Soul, And Of The Cross: The Utop