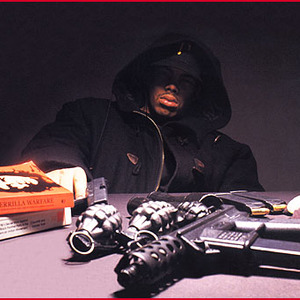 1) Paris (real name Oscar Jackson, Jr.; born October 29, 1967 in California) is a hip hop artist from San Francisco known for his militantly confrontational rapping, and especially the controversial track "Bush Killa." After earning a degree in economics from University of California-Davis, Paris founded Scarface Records but released his first single with Tommy Boy Records. "The Devil Made Me Do It" was his critically acclaimed debut 1990 LP; the title track was banned by MTV.

Paris' 1992 follow-up, "Sleeping With the Enemy", was not released due to the anti-George H. W. Bush track "Bush Killa" and the album's insert, featuring the artist waiting behind a tree, holding an assault rifle, as the president is waving to the crowd. Unable to find a distributor, Paris released it on Scarface Records and the album was a critical success though sales were slim (but successful by independent standards, at about 400,000 units). "Guerrilla Funk" (1994, 1994 in music) sold roughly 300,000 units, but his follow-up, "Unleashed" drew cries of selling out with its g funk sound, though the message still was one of unity and struggle against racial discrimination.

In 2003 he resurfaced with a new label, Guerrilla Funk Recordings. His most recent album is "Sonic Jihad" and continues his record of controversial album covers: it depicts a plane flying into the White House, and speaks on many topics, including the War on Terror, the war in Iraq, police brutality, black-on-black violence and conditions in inner-city communities. Included on the album are Kam, dead prez , and Public Enemy.

Most recently, Paris completed a project with Public Enemy, "Rebirth of a Nation" , a title taken from the 1915 film, Birth of a Nation, a racist portrayal of African Americans after the Civil War, glorifying the Ku Klux Klan. Although Chuck D is the primary vocal performer, Paris penned the bulk of the album which also features MC Ren, Immortal Technique, and the Conscious Daughters. This album is seen as a project separate from the discography of both Paris and Public Enemy.

2) Paris (website and myspace) is an indie-rock band from Stockholm/Sweden.

They have released the CDs "Yellow Eden", "Secrets on Tape" and will release "The landlord is kind enough to let us have our little sessions".
The singer also has a solo musicproject called "Emmon".


3) Paris was a glam and hard rock cover band during the mid-80s, having a handful of original songs as well that were only performed live. On getting a recording contract, they changed their name to Poison, becoming one of the better-known artists from the late-80s glam rock scene.

4) Paris is a UK male/female act from the early 1980s, made up of Bucks Fizz writer/producer Andy Hill, Nichola Martin, Ian Bairnson and Graham Broad. They released several singles but only one ever made the UK charts, No Getting Over You.
_____________________

6) Paris, former pseudonyme of Norwegian artist/singer/songwriter Hanne S?rvaag, born December 27, 1979 in Stavanger, Norway. She released her first album, 'You Know Me' (Sony/Columbia), in 2002. The sophomore release, 'Talk Of The Town' (Diamond Road Music), was released under her real name in 2006. Apart from being a performing artist in her own right, she's also making a career as a songwriter; notably she co-wrote the song "My Destiny" with Tim Baxter and Harry Sommerdahl, a song performed by Katherine McPhee in the American Idol finals 2006.

There Is A Storm

The Devil Made Me Do It