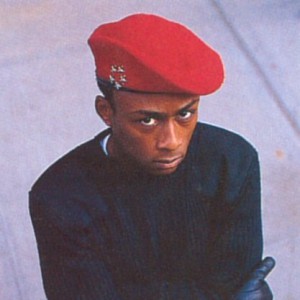 Richard "Professor Griff" Griffin is an American rapper and spoken word artist, and is a former member of the rap group Public Enemy and head of the Security of the First World. Early life A childhood friend of Carlton "Chuck D" Ridenhour, Griffin Goudreau was exposed to hip-hop as it came to the Long Island, New York town of Roosevelt, where most of the founding members of Public Enemy grew up. By the 1980s, Griffin had become a martial arts enthusiast as well as having done a stint in the U.S. Army.

A childhood friend of Carlton "Chuck D" Ridenhour, Griffin Goudreau was exposed to hip-hop as it came to the Long Island, New York town of Roosevelt, where most of the founding members of Public Enemy grew up. By the 1980s, Griffin had become a martial arts enthusiast as well as having done a stint in the U.S. Army.

After coming home, he started a security service to work the local party circuit, calling it Unity Force. Chuck D was then a part of the Spectrum City DJ-for-hire service led by Hank Shocklee, and Spectrum City and Unity Force frequently worked side-by-side at local events. When Public Enemy was formed and signed to Def Jam, Chuck D invited Griffin to be a sideman. Unity Force was renamed "Security of the First World", or S1W for short. The S1W's were brought along, and became a curious combination of bodyguards/dancers for the band. Their stage routines were a loose combination of martial arts, military drill and "step show" dances lifted from black college fraternities.

While technically not a signed artist at Def Jam, he was nonetheless a key traveling member of the band, serving as de facto road manager for several years.

In 1989, the band did an interview for the Washington Times. The interviewing journalist, David Mills, lifted some quotes from a UK magazine in which the band were asked their opinion on the Arab-Israeli conflict. Griffin's comments apparently sympathized with the Palestinians and, reiterated in the new interview, a media firestorm was set off.

In a series of press conferences, Griffin was either fired, quit, or never left. Def Jam co-founder Rick Rubin had already left the label by then; taking his place alongside Russell Simmons was Lyor Cohen, a one-time rap show promoter and an Israeli immigrant. Before the dust settled, Cohen claims to have arranged for a New York Jewish Historical museum to give the band a private tour. Nonetheless, increasing attention from the press and pressure from Def Jam hierarchy led Griffin to quietly leave the band by that December.

At the same time, Chuck D was in talks with 2 Live Crew leader Luther Campbell, who then signed Griffin as a recording artist for his label Skyywalker Records (later Luke Records). He recorded three albums for Luke, Pawns in the Game (1990), Kaos II Wiz-Dome (1991) and Disturb N the Peace (1992). These LPs were critically acclaimed by most in the hip-hop press, while getting heavily mixed reviews from the rock press, which tended to cite his recent controversies as a sticking point. Griffin eventually moved to Atlanta and did a brief stint working as a bounty hunter for a family member's bail bondsman service.

By 1996, he and Chuck D resumed their relationship as Griffin did some guest vocals on Chuck D's solo album, The Autobiography Of Mistachuck. By 1998, he had formally re-joined the band, performing on "Game Over" on the He Got Game LP and he went on tour with Public Enemy for the House of Blues/Smokin' Grooves tour, a kind of hip-hop-centered Lollapalooza. That same year, he released his fourth solo album, Blood of the Profit, on Lethal/Mercury Records. And The Word Became Flesh followed in 2001; in an unfortunate coincidence, it was released on September 11 of that year.

Griffin's role in Public Enemy has expanded, as he has contributed vocals and production work on There's A Poison Goin' On, Revolverlution and New Whirl Odor LPs. When not on tour with PE, he fronts a funk/metal/rap side project called The 7th Octave. The four-piece unit released their debut EP in 2004 on MVD Recordings. He has recently been critical of the popularity of Flavor Flav's show Flavor of Love, denouncing it as degrading towards Black women. On February 10, 2008, Professor Griff's house in Atlanta was destroyed by an explosion that was blamed on a gas leak; no one was hurt.

And The Word Became Flesh

Blood Of The Profit

Pawns In The Game (With The Last Asiatic Disiples)

Pawns in the Game