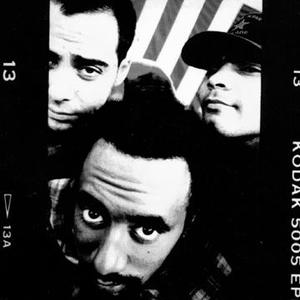 The Goats were an alternative hip-hop quartet from Philadelphia, Pennsylvania, United States. Their members included rappers Oatie Kato (the frontman), Madd ("the M-A-the-double-D"), and Swayzack. Most members of the group were Aboriginal Americans, and their concern with Aboriginal causes is reflected in their lyrics. The Goats held that Christopher Columbus was responsible for genocidal crimes against the Aboriginal inhabitants of pre-colonial America, including the rape of innocent women by his crew.

The Goats held that Christopher Columbus was responsible for genocidal crimes against the Aboriginal inhabitants of pre-colonial America, including the rape of innocent women by his crew. Their fury was expressed in their signature song, "Tricks of The Shade", with the lyrics, "Columbus destroyed more Indians than Hitler killed Jews; but on his birthday you get sales on shoes."

They developed a cult following after the release of two well-respected albums, Tricks Of The Shade (1992) (produced by producer Joe "the Butcher" Nicolo) and No Goats No Glory (1994), on Ruffhouse Records and Columbia Records respectively; both are presently out of print.

The Goats' political consciousness found them compared to Public Enemy, although they were more playful (devoting a number of songs to singing the praises of marijuana ? la Cypress Hill) and certainly less militant (although they did express nominal support for Louis Farrakhan.) However, where Public Enemy was exclusionary in its Afrocentric viewpoint, the Goats were not anti-white per se and instead advocated the responsibility of all non-white peoples to stand up for self-determination (including African-Americans and Aboriginals like themselves as well as Latinos and, notably, Asian-Americans, whom they depicted as brothers-in-arms in their struggle, in contrast to the virulent anti-Asian racism of their contemporary Ice Cube.)

They used the skits on their first album to criticize then-United States President George H.W. Bush and those whom he propped up, including the bourgeoisie and proponents of the redneck mentality. They were very vocal in their support of those who they believed had fallen victim to the racist status quo, including Nelson Mandela, Willie Horton, murdered youth Yusef Hawkins, and especially the imprisoned Aboriginal American activist Leonard Peltier.

Their political affiliation was decidedly more liberal than was fashionable at the time in hip-hop culture. Oatie described himself as an opponent of homophobia in the song "TV Cops" (a position only publicly taken at the time by Ice-T, though they were seconded by Common in 2002 and Kanye West in 2005). Further, their skit "Rovie Wade, the Sword Swallower" and the following track, "Aaah D Yaaa", were pro-choice songs concerned about the possible negative ramifications of a reversal of Roe v. Wade.

All updated information about The Goats are on their My Space Profile Page: http://www.myspace.com/thegoats1992 I have just gone to My Space to see if they had a Profile there or not. They do. Go ahead and check them out.

Tricks Of The Shade

No Goats, No Glory