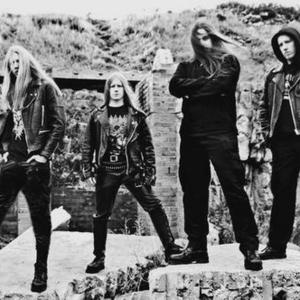 1) A UK black/death metal band formed in 2005. Their first album, ?Deathless Steel Command', is essentially a raw & fast death metal album with a black metal atmosphere/feeling. It was first released in 2005 on tape, but released shortly afterwards on CD format through Invictus Productions. Between albums the band recorded the promo CD ?When the Pillars Fall', which was never meant for public release. In June 2007 Spearhead recorded their second album, ?Decrowning the Irenarch'. On this record they switched almost completely to a death metal sound comparable stylistically to Morbid Angel and Angelcorpse. In 2011 the band released their follow up (third) album entitled 'Theomachia' on Agonia Records. This followed on stylistically from its predecessor, but undeniably chose a more relentless approach; not to the extent of Hate Eternal, but in a way more brutal than 'Decrowning the Irenarch'. This was also achieved by deciding to record all instruments in a "live" way. The drums, for example (provided by ex-Belphegor drummer) are to be heard on 'Theomachia' with a very natural sound in the context of a different style of production; this time with Orgone Studios (Code, Ulver, Virus). This is partly why the production gives a different impression to the 2007 work recorded at Hertz Studio (Decapitated, Behemoth, Vader).

Contrary to common opinion, Spearhead are not named after the Bolt Thrower track/release of the same name - it is merely a coincidence that their fellow countrymen used a militaristic name. Over the years the band has toured Europe and USA with Impiety and Urgehal, as well as supported numerous big acts like Onslaught, Napalm Death, Origin, Sabbat, Absu etc. Spearhead are currently preparing to play live again - this time with a slightly different line-up, since they long standing drummer, Vortigern, left the band.

2) Synonymous w/ Michael Franti (also see Michael Franti & Spearhead). His earlier projects include The Beatnigs & The Disposable Heroes Of Hiphoprisy, which had more of an experimental/industrial sound. Spearhead then joined with Michael Franti; the young rapper who composed half of the Disposable Heroes of Hiphoprisy. The group separated after releasing their album Hypocracy is the Greatest Luxury (1992). The group then released two albums under the Spearhead name; Home (1994) and Chocolate Supa Highway (1997). The success of these dirty, wet, funky, smooth albums drove the name change to Michael Franti and Spearhead and their impressive success and influence can sadly sometimes overshadow the impressive early Spearhead releases. fans should refer to his other Last.fm pages to avoid confusion with the metal band, Spearhead.

3) An RAC band from the UK. The project of English Rose & Avalon members.

Into Battle We Ride