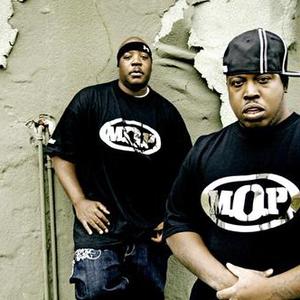 M.O.P., short for Mash-Out Posse, is an American hip hop group from Brooklyn, New York.Comprised of rappers Lil' Fame aka Fizzy Womack and Billy Danze, the group is best known for frenetic singles such as 2000's Ante Up (Robbin Hoodz Theory). Throughout their whole career M.O.P. deliver the most hard, vicious and violent music hip hop could ever offer. They struck out in 1994. with To the Death, a dark...

Throughout their whole career M.O.P. deliver the most hard, vicious and violent music hip hop could ever offer. They struck out in 1994. with To the Death, a dark, slow and raging LP that was fully produced by DR Period and featured one of the biggest hardcore rap anthems of the nineties, How About Some Hardcore, that's put by any hardcore rap fan in the same category with Onyx's Slam, Jeru The Damaja's Come Clean and Wu-Tang Clan's Shame On A Nigga.

In 1996 MOP released their second effort, the totally-sophomore-slump-free Firing Squad. Despite totally changing their production sources (the album was mostly produced by Gang Starr's DJ Premier and Fizzy Womack himself), M.O.P. continued torturing fans' ears with extremely hard, rhinocerously slow beats and ecstatic, rampant delivery. Subject matter is either battling with heavy use of criminal associations or serious talk about life in the ghetto.

Two years later M.O.P. hit the fans with a starter - an EP called Handle Ur Bizness and later that year released First Family 4 Life, working on the same formula as ever, again with heavy percentage of DJ Preemo's production, more gems produced by group member Lil Fame and proving that M.O.P.'s trademark is not only the hardest hardcore you can get but also consistency.

Most of M.O.P.'s work was considered underground until 2000, when they released Warriorz, their best work yet. Mainstream got the first hint with "Ante Up", a track produced by DR Period for first time in 6 years. But with self-produced Cold As Ice, a track that featured a rock-song sample (Cold As Ice by Foreigner), M.O.P. achieved major mainstream success, though the song's lyrics were explicit and raging as usual (the radio version edits out much lyrical content to comply with FCC regulations).

In a strange turn, M.O.P. featured on the title track of sugary-sweet boy band LFO's 2001 album Life Is Good. Aside from the lack of profanity, M.O.P.'s short verse was rapped in their trademark loud, intense style. It is unclear how this unusual team-up was organized, but it is unlikely that this brief guest spot led to much crossover fan appeal for either group.

"Ante Up" was later remixed with added verse by Flipmodian Busta Rhymes and Terror Squad queen Remy Ma, and was released on the greatest hits record 10 Yearz And Gunnin'. Believe it or not, it is the last hip hop record from M.O.P. In the beginning of the century they switched labels from Loud to Roc-A-Fella in order to have more income and more creative control, but the long-awaited release is still on the shelves. M.O.P. also made a rock-rap album titled simply Mash Out Posse, but it received bad reviews from rap fans who wanted M.O.P. to just rap.

In June 2005, M.O.P. officially announced their signing with 50 Cent's G-Unit, at the same time as Queens rap duo Mobb Deep.