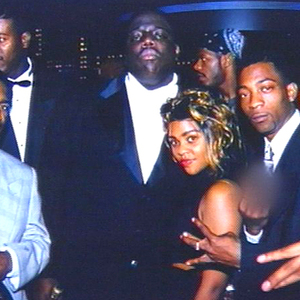 Junior M.A.F.I.A. was a large Brooklyn crew put on by The Notorious B.I.G. Hailing from Bedford-Stuyvesant, NY, the group was comprised of four separate acts: the 6s (Lil' Cease, Chico, and Nino Brown), the Snakes (cousins Larceny and Trife), MC Klepto, and 47 MC Lil' Kim. The band's first and only album, Conspiracy (1995), contained the hits "Player's Anthem," "Need You Tonight," and Biggie and Lil' Kim's classic "Get Money.

With flashy money/sex/drugs rhymes laid over production from Clark Kent, EZ Elpee, and others, the M.A.F.I.A. fit right in with the emerging gangsta-glam movement coming out of New York City. Lil' Kim went on to become a star in her own right, releasing a total of four albums as of 2006. Lil' Cease's 1999 solo effort The Wonderful World of Cease a Leo went largely unnoticed, then became a waiter in an upscale Italian restaurant. The other Mafiosi have since faded from the spotlight.