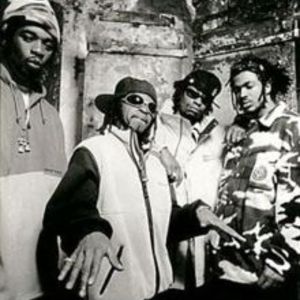 The Lost Boyz are a Hip Hop group from South Jamaica, Queens, New York. The original group members were lead MC Mr. Cheeks, backup MC and hypeman Freaky Tah, DJ Spigg Nice and Pretty Lou. In 1995, the group released their debut single "Lifestyles Of The Rich & Shameless", charting on the Billboard Hot 100. The release landed them a record deal with Uptown Records. The group contributed a single to the Don't Be a Menace to South Central While Drinking Your Juice in the Hood soundtrack, titled "Renee".

The song became a major hit, breaking into the Top 40 on the Hot 100 chart. The single also reached Gold status in 1996. On June 4, 1996, they released their debut album Legal Drug Money. The work was highly acclaimed, and the album featured five Billboard Hot 100 hits, including their past singles "Lifestyles Of The Rich & Shameless", "Renee", as well as "Music Makes Me High", "Jeeps, Lex Coups, Bimaz & Benz" and "Get Up". The album was certified Gold by the RIAA in late 1996. Their second album, Love, Peace & Nappiness, was released on June 17, 1997 on Uptown/Universal Records. It featured another Hot 100 hit single, "Me & My Crazy World". One of the most famous songs on the album was the posse-cut "Beasts From The East", featuring A+, Redman and Canibus. The album wasn't as acclaimed as their debut, but fared well commercially, reaching Gold status in late 1997.

Lost Boyz called it a day in '99. On the night of March 28, 1999, at a birthday party for Mr. Cheeks, Freaky Tah was shot in the head while exiting the Sheraton Hotel in Queens. Tah was taken to Jamaica Hospital, where he was pronounced dead at 4:20 am, at the age of 27. The getaway driver, Raheem Fletcher, was sentenced to 7 years in prison for Manslaughter. In 2001, Kelvin Jones pleaded guilty to the murder. The three remaining group members finished their third album LB IV Life, released in September 1999. The effort fell short critically and commercially, failing to provide any Hot 100 hits, and failing to reach Gold status. The three split-up after the release, and lead MC Mr. Cheeks began a solo career. He released his first solo effort John P. Kelly in 2001, which featured the smash hit "Lights, Camera, Action!". The album also featured a heartfelt tribute song to Freaky Tah, titled "Till We Meet Again", featuring Bob Marley's son Stephen. Cheeks released another album in 2003, titled Back Again!, then followed in 2004 with Ladies & Ghettomen. On January 16, 2004, DJ Spigg Nice was tried and convicted of multiple bank robberies in New Jersey and was sentenced to 37 years in prison. The group released a compilation album Lost Boyz Forever in 2005, featuring past hits and previously unreleased material.