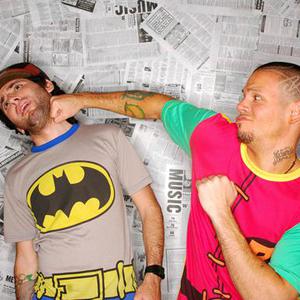 Their sister Ileana (aka PG-13) has contributed the female vocals to some of their songs, and so has Residente's mother, Puerto Rican actress Flor Joglar de Gracia (on the single "Tango del Pecado").

Although most people have labeled Calle 13's music as reggaeton, they have tried to distance themselves from the style. Visitante, being a professional musician, tries to fuse diverse styles in the group's songs. Early cuts featured elements from jazz, bossa nova and salsa, while recent songs feature cumbia, tango, electronica and others. In their recent tours around Latin America they have added different musical elements according to the place the band is playing in, yet many of their songs carry the traditional reggaeton "Dem Bow" beat such as in their hit Tango del Pecado and the remix to "Suave".

Singer Residente is reluctant to label their music in a specific genre, instead calling it plain urban style. He has a clear preference of hip hop over traditional reggaeton and both he and his brother justify it by saying that only three songs out of fifteen songs in their eponymous debut album, as well as four out of fifteen songs in their album "Residente o Visitante", feature reggaet?n beats.

Residente's lyrical style is inspired partly by the lyrical approach used by artists such as Vico C and Tego Calder&oacute;n, trying to minimize what they refer to as "clich?s" of the genre -such as open confrontations with other rappers, known in Spanish as "tira'era", or tiradera. Residente's trademark, by his own account, is a lyrical style full of sarcasm, satire, parody and shock value, which some critics and fans have likened to Eminem's. It also uses Puerto Rican slang considerably (which in turn incorporates a sizeable dose of Spanglish), as well as allegory.

Residente's distinctive lyrics treat a wide and random variety of subjects. He mentions (and sometimes derides) celebrities and known icons such as Diddy in the song "Pi-Di-Di-Di (La Especialidad de la Casa)" ("The Specialty of the House"); Mickey Mouse, Red Man, and 2Pac, in "Tengo Hambre" ("I'm Hungry"); 50 Cent in "La Crema" ("The Cream"); Madonna ("I mean, Maradona", Residente says) in "Sin Exagerar"; Puerto Rican singer Nydia Caro (rather affectionately) in "La Era de la Copiaera", wrestler Abdullah the Butcher in Tributo a la Polic?a ("A Tribute to Police"), and most controversially, his diss track aimed at the Federal Bureau of Investigation in Querido F.B.I. ("Dear F.B.I."). The song "A Limpiar El Sucio" ("Cleaning Up The Dirt") is rumored to be a veiled (some say direct) attack on Puerto Rican entertainment journalist Milly Cangiano.

Visitante, on the other hand, is strongly influenced by electronica, world music, and particularly latin american folk and popular music. Recently, Visitante has claimed to be influenced by music from Central Europe such as Fanfare Ciocarlia (particularly its collaboration with Roma band Kaloome, also known as "The Gypsy Kings and Queens") and Emir Kusturica's group, "The No Smoking Orchestra". In live presentations, Visitante can be seen playing a variety of instruments: an electric guitar, synthesizers, an accordion, a melodica, a Puerto Rican cuatro and a theremin.