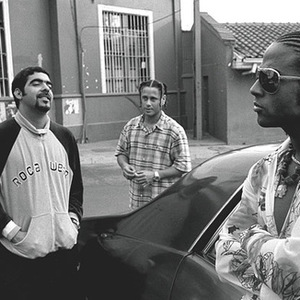 Orishas is a group that combines new hip-hop rhymes with classic cuban beats. They've revolutionized latin music by creating a fusion sound. Their albums include "A lo Cubano", "Emigrante", "El Kilo", "Antidiotico" & "Cosita Buena". Below is the complete Bio from their website: It's been quite a journey since Orishas released their first album 'A Lo Cubano' in Spain in May 1999. Lauded by the press throughout Europe ever since it came out, the group launched into a marathon tour that started in summer 1999.

It's been quite a journey since Orishas released their first album 'A Lo Cubano' in Spain in May 1999. Lauded by the press throughout Europe ever since it came out, the group launched into a marathon tour that started in summer 1999. From clubs to festivals, the European tour stretched out to just over two years with evening performances of their music catalogue at the Olympia, the Ancienne Belgique and the Royal Festival Hall in England. They were to play at the most prestigious festivals in Europe like the Lowlands (Holland), where they topped the bill along with groups like Deftones and Cypress Hill, and the Roskilde (Denmark), where they brewed up a storm alongside groups as disparate as Tool and Wyclef Jean. Orishas also performed in the year 2000 at festivals like the Paleo Nyon Festival, the La Rochelle Francofolies and Pop Kom.

The group gradually acquired international standing, and after conquering Europe they went on to win over the United States in November 2000, with the American press unanimous in its acclaim: articles and reviews in Time, Rolling Stone, The Source, Vibe ,... Little by little they became an essential live band, capable of sharing the stage with artists as diverse as Compay Segundo, Orquestra Aragon, Iggy Pop, Cypress Hill, Macy Gray and Marcus Miller. Orishas paid their dues on the road and left Europe to take part in various jazz festivals in Canada and South Africa, dropping in on Brazil and Mexico. Orishas left no doubt that their musical fusion, unique in its genre, enables them to break the frontiers of style and to be equally at home in front of a latino, hip hop, pop or rock audience.

December saw their triumphal return to Cuba, where they had occupied the top slots of the radio charts for months and where they gave two concerts that brought together tens of thousands of young Cubans. They had come full circle, because after touring the world Orishas' dream finally came true: playing in front of their families and the people of Cuba.

After more than 200 concerts worldwide, the group decided to get back to song writing in August 2001. It was only to be expected that they would start working together again with the French producer and composer Niko Noki, (Passi, Bisso Na Bisso), who along with Roldan Gonzalez had been responsible for the tracks on the first album. He in turn engaged the services of a young composer of the future, DJ Mig-One, who had two albums with his group Starflam under his belt. They strung several studio sessions together between Belgium and Paris to knock up no fewer than twenty tracks. In November 2001 the group was ready at last to go back into the studio proper to record the successor to A Lo Cubano. They opted for the EMI studio in Paris, where the cream of Cuban musicians gathered at the group's behest to immortalise the songs of the Emigrante album. The group had matured and learned a great deal from touring the world, the subjects are more profound and given a more international treatment. Having had their eyes opened by the big world has had a visible impact on their writing. As on the first album, Miko Niko is in charge of musical production and most of the tracks, DJ Mig One has penned 3 compositions that underpin the plurality of their influences. The album was mixed at the Polygone studio in Toulouse under the auspices of Mario Rodriguez (Notorious B.I.G., Public Enemy, Mobb Deep, Fonky Family, 113...). Once again the alchemy is perfect. The new album sees the return of two very talented artists and long-standing friends of the group: Passi on La Vida Passa and Yuri Buenaventura on 300 Kg de Rap.

The new album has a pan-European release on April 22, 2002 and is being promoted in a tour that takes in more than ten countries before being presented on the stages of the major European festivals this summer.