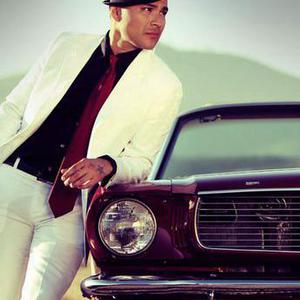 Frankie J (born December 14, 1980) is a Mexican American pop singer. He has had several hits in the US, including "Don't Wanna Try" in 2003 and "Obsession" in 2005. His album The One debuted at #3 on the Billboard album charts in April 2005. Early career He was born Francisco Javier Bautista (a.k.a. Frankie J.) in Tijuana and raised in San Diego from the age of 2. He comes from a musical background with his father being the lead singer of a traditional band. Frankie J grew up listening to both traditional Latin music as well as R&B.

Early career
He was born Francisco Javier Bautista (a.k.a. Frankie J.) in Tijuana and raised in San Diego from the age of 2. He comes from a musical background with his father being the lead singer of a traditional band. Frankie J grew up listening to both traditional Latin music as well as R&B. He attended Southwest High School (San Diego, CA) for his high school years.

As a teenager, he started listening to freestyle music by Lisa Lisa, Brenda K. Starr and George Lamond. He started writing his own songs and singing in the same falsetto style as Lamond. At 15, he signed a contract with a Canadian independent label working as Frankie Boy and recorded songs which failed to achieve any success. In 1997, he signed with Jellybean Benitez.

In the late 1990s, he joined Kumbia Kings and was a member of that successful Latin group touring throughout Latin America. The group played in front of 100,000 people in a concert in Monterrey, Mexico.

Frankie's ambitions were always directed to the American pop-music markets. In 2002 He approached Los Kumbia Kings mangement in an attempt to secure record deal as a solo-artist. He proposed that they record, promote, and market him to the "MTV" market. A vastly diffent music culture then what Los Kumbia Kings made their name in, but Management declined, citing the risky investment. Frankie then shopped demos to an array of record companies, and garnered a tremendous amount of interest, but his contract with The Kumbia Kings would prove to be a problem.

Frankie asked to be his released from his Kumbia Kings contract, but they declined. Frankie bolted from the group anyway, but soon found himself in court over the matter. Lawsuits were filed from both sides, and eventually settled out of court. Details of the settlement were not disclosed.

Solo Career
Frankie J signed as a solo artist with Columbia Records and released his first album What's A Man To Do in 2003 which failed to chart. His self-titled first Spanish-language album was released later in the same year. The single "Don't Wanna Try" peaked in the top 10 on Billboard's Hot 100 Singles Chart, while "Ya No Eres Igual" was top 10 on the World Latin charts.

He collaborated with Baby Bash, a relative, on another pop hit called "Suga Suga" which reached #1 in New Zealand in 2004 and was a top 10 hit in the US and Australia in the same year. Frankie J worked with a number of wellknown producers on The One including Irv Gotti of Murder Inc. on the title track. Mario Winans on a track called "Just Can't Say It's Love". The first single "Obsession (No Es Amor)" featuring Baby Bash has been a big hit on the US pop charts reaching the top 5 in April 2005. The One was released in the US in April 2005 and debuted at #3 on both the Billboard 200 chart. The follow-up singles "How To Deal" and "More Than Words" (released in conjunction with a DualDisc re-release of The One) continued the album's route to platinum sales. However, the fourth and final single, the title track featuring 3LW garnered few spins at radio.

Jermaine Dupri & Mannie Fresh are among two of the big producers for Frankie's next English studio album which will be released in the 4th quarter of 2006. The untitled album's first single will be "That Girl" which was produced by Mannie Fresh and features both Mannie Fresh and rapper Slim Thug. A version which excludes Slim Thug and replaces him with Chamillionaire exists and can be found online and on the official promo cds.