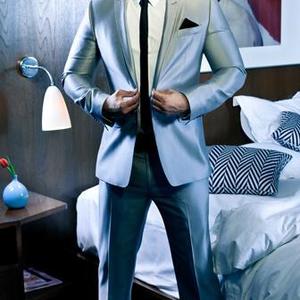 Anthony "Romeo" Santos (born July 21, 1981) is an American singer, featured composer and lead singer of the Bachata group Aventura. As a member of Aventura, Santos has been a key figure in popularizing Bachata, with hits reaching near the top of the Billboard Latin charts and the top of charts in Europe. In 2002, the band's song "Obsesi?n" was number one in Italy for sixteen consecutive weeks. Santos was born in The Bronx, New York, United States to a Dominican father and a Puerto Rican mother. At twelve years of age, he became a member of the church choir.

His soulful voice has played a key role in the group's success. While the group performs in both English and Spanish, their work was widely ignored by much of the English-speaking media during the early part of their career. On May 9, 2011, Santos released his first single, "You", from his upcoming solo debut album, "Formula" . The song became a number-one debut on the Hot Latin Songs and Tropical Songs chart. The Promise Songfacts reports that after seventeen years together, the quartet publicly confirmed it was breaking up for good in July 2011. "Promise," the second single from Santos' solo debut album, Formula was released to radio on September 2, 2011. The song is a duet with R&B singer Usher.

In 2006, Santos took an ASCAP award in tropical music for his megahit song "Obsesi?n" and another in the English-language market in Pop?the first time a Hispanic/Latino writer has won an ASCAP award in the U.S. market. In 2007, he took the Billboard Composer of the Year Award over such legendary writers as Marco Antonio Sol?s and Joan Sebastian. In 2008 he was nominated again in this prestigious category. Frankie J's cover version of "Obsesi?n" was #2 across the country in all markets for twenty-two weeks; this recording earned Santos ASCAP awards in Latin and Pop. He has also penned hits for artists such as Wisin & Yandel ("Noche de sexo"), Thal?a ("No no no"), Hector Acosta ("Me voy"), and Antony Santos ("M?tame"). In 2009, Aventura won the "Favorite Latin Music Artist" prize at the American Music Awards, and was invited to play for United States President Barack Obama at the White House. Santos is scheduled to appear at the 2010 MTV VMAs on Sept. 12, 2010.