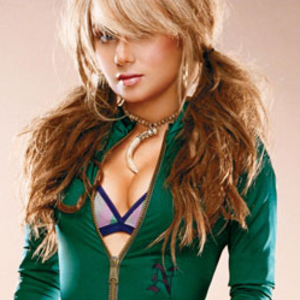 1. Natalie (born Natalie Nicole Alvarado on September 2, 1979) is an American pop and R&B singer. Natalie made her debut as a singer with her hit 2005 single Goin' Crazy the song reached #13 on the U.S. Billboard Hot 100 singles chart. Her self-titled debut album Natalie was released in May 2005 and reached #16 on the U.S. Billboard 200 albums chart. Her second single from the album, Energy (featuring Baby Bash), peaked at #66.

Natalie has also collaborated with Baby Bash on the songs "Bubbalicious" and "Throwed Off" from his 2005 album Super Saucy. She joined the Latium World Tour with Baby Bash and Frankie J in 2005. She also has appeared on Chamillionaire's The Sound of Revenge in the song "Think I'm Crazy". Natalie is currently working on her new album, "Everything New". It was released on September 19, 2006. Along with a new album, she has a new hair color; it is now blonde. The first single of "Everything New" is "What You Gonna Do" with the latter featuring Bun B. The second single is "Love You So". The album did receive good reviews but was not as lucky on the Billboard 200 chart, being 2 copies short of charting.