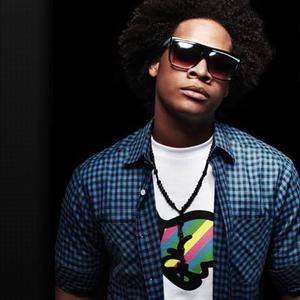 ?When I started to grow my hair and I got expelled from school, I knew that music was going to be my future. I thought ?This is what I have to do now' because I just sacrificed my education. School in Barbados is very different than in the United States because we were a British colony; you wear a uniform, your hair has to be a certain length. When I stepped out to do this that's when I started to take music really seriously. I knew my hair would be a big part of my image. I knew there was no going back.?

It's an intriguing tale, the rebel with a cause. But 17-year-old Jaicko [pronounced Jay-ko], has long been the author of his own destiny. Though he's matter-of-fact about his forthcoming album on Capitol Records ??It's life through the eyes of a 17-year-old?? this is an artist with a lot to say.
In fact, the native of Barbados is very much culling the classic American story: an immigrant who comes to our shores armed only with the best intents and an idea he believes has currency. The plan: ?Caribbean-infused music: it's a bit of Barbados brought to America. Music fans will want to listen to me all day. Caribbean fans will want to listen to me all day.? In this vein, Jaicko is a far cry from the current wave of teenybopper talents; no skin-deep musical charlatan, he writes and produces much of his own music. He and his father Phillip Forrester, a longtime nightclub musician in Barbados, comprise a formidable songwriting duo. ?My dad has always been a good friend, and a creative partner, so it's never really been difficult to work as a father and son team,? Jaicko notes. ?We write a lot of our songs together; most of the songs that got me my deal were songs we wrote and produced.? Indeed, under Phillip's tutelage, Jaicko has been performing on stage since the tender age of nine. Yes, nine. And recording in studios since age ten. So while a 17-year-old's gripes about the struggles inherent in the music industry may at first warrant a sidelong glance, further inspection reveals an earnest and unfazed artist.
?Around that time I was actually rapping,? he reveals. ?I always knew I could sing but I never took it seriously. Back then, if you were a rapper, you couldn't be a singer. That's changing now though.? Jaicko first stepped onto the stage at a club called the Ship In, one of many establishments lining the famed St. Lawrence Gap, a hub of Barbadian culture and nightlife. Response was instant and unilateral. Jaicko went on to cut an independent album that sold 6,000 copies islandwide??a good number,? he reminds, ?considering our population is under 300,000 people.? Jaicko scaled the nation's two Top 40 radio stations, ?sandwiched between Justin Timberlake and Jay-Z,? he jokes. He opened for Ne-Yo when the latter made a tour stop in Barbados. Jaicko has also been nominated for numerous Barbados Music Awards, including five last year, often pitted in the same category as breakout Barbadian Rihanna.
Indeed, the island queen has quickly become the face of the small Caribbean nation. And her exploits are respected both home and abroad: ?We were always seen as apart from the rest of the world,? Jaicko asserts. ?It almost seemed impossible for a Barbadian artist to get a record deal. I was pursuing this before Rihanna, but seeing her success made me believe more I could do it, it removed whatever doubt was there.?
In looking at Jaicko, doubt seems a foreign concept. In hearing his music, it's a word utterly stricken from the lexicon. He's concocted an intoxicating island brew that washes over the listener as readily as a Caribbean swell. Leading the charge is ?Oh Yeah,? an effervescent anthem boasting an infectious hook and Jaicko's tongue-in-cheek sensibilities. The bouncing beat + Jaicko's lightly-lilted vocals = this song is a no-doubter.
Also of note is the throbbing sing-song ?Two Piece,? orchestrated by the talented production team Stargate (Ne-Yo, Beyonce). Gifted writer Robert Allen (Chris Brown, Rihanna's ?Disturbia?) contributes the smoothly sweet lyrics and deft hook. Jaicko describes the ditty thusly: ?We don't need all the fancy things in life, all the glitz and glamour, to be happy. All we need is each other.? Seems a good theme to adopt given the state of the economy. Look also for the driving ?Will You Be There?? from the artful hands of producer Jim Jonsin (Lil' Wayne's ?Lollipop?) and Wayne Wilkens. Jaicko flexes his silver pipes while invoking what he terms the song's double meaning: ?Will you be there when the darkness covers the sky/Will you be there when the Earth stands still and there's nothing left but pride.? A disciple of Stevie Wonder and Michael Jackson, Jaicko is intent on infusing his music with sophistication and sentiment. ?Will You Be There?? stands as ample testament.
More battle cry than waxing ballad, ?Can I? is Jaicko's most personal offering. It's also marvelously catchy and yet mature. The surging chorus brims with uplift. ?I really express myself in ?Can I,? he notes. ?It's the story of my coming here, being here?my struggle with broken promises in music and in my personal life. That song speaks most to me. I was in a frustrated place when I wrote it; the whole song was an accident. We were working on something else, and my father stepped out for a few minutes, and in that time I wrote this song. The beat itself tells a story; the beat indicates what the song is going to talk about. The beat inspired me to write my own story. It was a marriage between my emotion and the music.?
Indeed, Jaicko personifies harmony: between cultures, genres, ages, genders. His particular brand of music is set to shove aside the driftwood on American airwaves. ?My lane,? he grins, ?is wide open. This is something that I have been trying to do for years, to break out internationally. I built a fanbase back in Barbados so it's a good feeling to take to the States and the rest of the world now.? Soon, the rest of the world will know that very good feeling, too.?