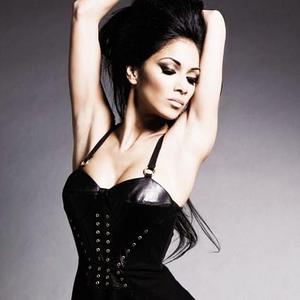 Nicole Prescovia Elikolani Valiente Scherzinger (born June 29, 1978 in Honolulu, Hawaii, United States) is an American singer, songwriter, dancer and occasional actress who is best known as the lead singer of The Pussycat Dolls. Previously, Scherzinger was a backing vocalist for the late-1990s rock group Days of the New, then she was part of reality TV girl group Eden's Crush. After the disbandment of the group she joined The Pussycat Dolls and became the lead vocalist during the transition to a popular music group.

Previously, Scherzinger was a backing vocalist for the late-1990s rock group Days of the New, then she was part of reality TV girl group Eden's Crush. After the disbandment of the group she joined The Pussycat Dolls and became the lead vocalist during the transition to a popular music group. So far, The Pussycat Dolls have released two albums, PCD and Doll Domination, with two supporting tours. More recently, in early 2010, Scherzinger became the winner of the tenth season of Dancing with the Stars.

Nicole Scherzinger was born on June 29, 1978, in Honolulu, Hawaii. Her father, Alfonso Valiente, is of Filipino descent, and her mother, Rosemary, is of Hawaiian, Ukrainian, and Russian descent. In an interview, Scherzinger said: "I'm Filipino-Russian-Hawaiian, but people think I'm from Pakistan". Her mother Rosemary was eighteen at the time of Scherzinger's birth and lived in an inner city neighborhood. Nicole's parents separated when she was still a baby. Her maternal family moved to Louisville, Kentucky, when she was six years old, with her sister Ke'ala and her German-American stepfather Gary Scherzinger. Nicole met Nick Hexum, of 311, backstage at a Days of the New concert in 2000 or 2001. They dated and later became engaged but broke it off sometime in 2004. She then dated actor Talan Torriero from 2005 to 2007. For the last few years she has been dating 2008 Formula One World Champion Lewis Hamilton who currently races for Vodafone McLaren Mercedes.

In an interview with The Daily Mail, Scherzinger explained that she had been brought up with a strict religious (Roman Catholic) upbringing in Hawaii. She first attended Meyzeek Middle School as an adolescent. Growing up, Scherzinger states that she didn't have a lot of money and the singer thanks her mom for all the support she gave her to become what she is today. Scherzinger began performing in Louisville, attending the Youth Performing Arts School at duPont Manual High School and performing with Actors Theatre of Louisville. As a teenager, Scherzinger was the first runner-up at the 1996 Kentucky State Fair's Coca-Cola Talent Classic contest. Scherzinger majored in acting and musical theatre at Wright State University, where she played Velma Kelly in Chicago and Julie La Verne in Show Boat but put her studies on hold in 1999 to sing backing vocals for the rock band Days of the New.

From 2006 until late 2008 Scherzinger had been working on her debut album which was titled Her Name Is Nicole. She recorded/wrote about 75-100 songs for the album which was supposed to be released in 2007 before being pushed to October 16, 2008 and later into 2009 before being shelved. She told MTV "I've always said that in the Pussycat Dolls, I kind of feel like Superwoman. But that's just one of my alter egos. I've got the vulnerable, lovesick side of me amongst others which all appear on my record."

Scherzinger confirmed that she has done one song with Slash for his solo album Slash released in April 2010. On February 1, 2010 along with other artists Scherzinger had re-recorded "We are the World", a charity single for the victims of the 2010 Haiti earthquake. The song debuted during NBC's coverage of the opening ceremonies of the 2010 Winter Olympics. It was released as a single on iTunes on February 12, 2010 accompanied by the music video.

Reports of a second attempt at a solo album surfaced in January 2010 when Contactmusic reported that singersongwriter Ne-Yo is working with Scherzinger on new material. Ne-Yo had previously given two songs he wrote, "Save Me From Myself" and "Happily Never After", to Scherzinger for Her Name Is Nicole. Of the new collaborations he said,"she is putting all her energy into her work". He was also quoted as saying Nicole is in a state of liberation right now so the tracks are very free. She is in a place where she is happy to be alive and the tracks are definitely expressing that. The whole album is going to be a pressure release - a great big exhale - and I'm happy about that. She has a lot of emotions after splitting up with Lewis (Hamilton). But it's like taking an eagle and giving it back its wings.

On January 26, 2010, it was revealed that Jay Sean and Scherzinger were both working on something in the studio together. The video was originally posted to twitter but has been uploaded to the general internet too and shows the pair having a good time at Hit Factory (Criteria) record studios in Miami, Florida. In the video Scherzinger reveals she has been recording in the studio which Mariah Carey created some of her best known material as well as 'Studio F' where Sean recorded "Down" with Lil Wayne and where Scherzinger previously laid down vocals for Timbaland's hit single "Scream" with Keri Hilson. The pair also made note to T-Pain and Lil Wayne who were present at the studio. It is unknown whether the pair achieved any musical success e.g. recorded any usable songs and it is unknown if the records are for an upcoming single for Jay Sean, the upcoming third album from the Pussycat Dolls or Scherzinger's own heavily delayed studio album which is also due for release in 2010. Separately it was reported that she was working with Chuck Harmony whose previous credits include Rihanna's top-ten hit "Russian Roulette" (2009) as well as multiple credits on Ne-Yo's Year of the Gentleman (2008) and Mary J. Blige's Growing Pains (2007). "My music that I'm working on now for my album might have a little more rock, funk, soul edge, but it's basically in the genre of popular music and it's just honest music, fun music".

Rap Up first reported her intention to release a new song on May 23, 2010 stating that "The single "Nobody Can Change Me" is an empowering song, so it's very much like Pussycat Dolls, but it's just [Nicole] singing the same thing". Scherzinger herself described the single as "uplifting and powerful song with a deep meaning" During one radio interview she the song was recorded at night whilst she was competing on season ten of U.S. reality competition ,Dancing with the Stars. It was mastered on May 23, 2010 ready for its premiere on Ryan Seacrest's KIIS FM radio show the following day. Amongst the first to review the song was Beck Bain of Idolator. She was not impressed, "after listening to the treacly pop tune, we think she has a better shot at becoming a full-time sailor than reviving her solo career anytime soon. ... Her voice sounds a little bit higher/squeakier than usual, and the overproduction of the track certainly doesn't help?we know this girl can saaang, and this generic pop song about empowerment or independence or some other vague 'let me be me' message does nothing to utilize her vocal range. ... And if Nicole wants to win the public back, it's probably in her best interest to release a thumping dance track with sex appeal than an uninspired, uninteresting message song." However Amos Barshad of New York magazine actually liked the song stating that "there's none of the Pussycat Doll's forced sexiness here; instead, it sounds like something that could have just missed the final cut on a Kelly Clarkson album (that is sort of supposed to be a compliment, yeah)."

Then in August 2010 Swedish electropop producer RedOne was interviewed by the BBC. In the interview he revealed he had been working on Scherzinger's album. "I just finished her album. Her last one never came out because it was collecting hamburgers, like fast food. One from McDonalds, one from Burger King, and so on. It tasted good, but it wasn't consistent. Her new record - people are really going to go crazy about it because it's the real her." Scherzinger confirmed these reports in a September 2010 interview with X magazine. In reference to Her Name is Nicole she said "It was actually my decision not to put it out, not the label's". Then she said "I've been working with RedOne, which is an honour. He's an unbelievable producer and musician. He had made some amazing songs with Lady Gaga. Now, there is someone with the 'x factor'. I can't touch GaGa or RedOne in that space, but I know that we've created something unique of our own." Scherzinger's new single, "Poison", premiered on her official website and YouTube account on October 14, 2010. It is due for release on November 29, 2010. A picture from the video shoot was revealed by MTV, showing Scherzinger dressed provocatively. On November 18, 2010, she joined Prince on-stage during his concert in Abu Dhabi. While working with RedOne she has also recorded vocals for songs which will be included on Mohombi's debut album. Mohombi is the first signee to RedOne's record label.

Right There (The Remixes)