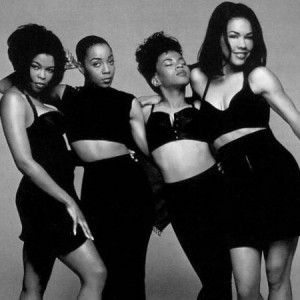 En Vogue has sold over 28 million albums and singles worldwide. They have won more MTV Video Music Awards than any other female group in MTV history, a total of 7 VMAs. The group was named the second most successful girl group of the 1990s and the 18th most successful act overall of the 1990s according to Billboard magazine.

In 2005, after a eight year absence, Dawn Robinson rejoined En Vogue but left again the same year. The original four went on to sign with one of the industry's largest management firms, The Firm Management Group. That September, they joined Salt-N-Pepa for the girl groups' first ever joint public performance of their 1994 hit, "Whatta Man" at VH-1's Hip Hop Honors, and briefly toured. They also earned another Grammy nomination for the single So What the Fuss, which featured Stevie Wonder and Prince. The group also appeared in the single's music video. After failing to agree on business terms, Robinson once again chose to defect En Vogue and Bennett remained. As a result, En Vogue was let go from The Firm. En Vogue continued to perform spot dates in North America with Terry Ellis, Maxine Jones, Cindy Herron and Rhona Bennett. This line-up also saw the group return to Europe and Japan for select concert dates. During this time, En Vogue teamed up with Belgian singer Natalia for a song called "Glamorous" where Rhona Bennett's vocals are featured. The single reached No.2 in Belgium charts and will be followed by a DVD release.

As of April 2008, Robinson has returned to En Vogue for some dates Bennett for others. She is said to be scheduled to perform with the group on several tour dates, including the 4th Annual Plymouth Jazz Festival in Tobago, alongside such mega-stars as Whitney Houston and Rod Stewart. With the tentative return of Robinson, expectations of En Vogue planning a widescale commercial comeback seems imminent, however premature to confirm.

On June 24, the original lineup of En Vogue appeared on the BET Awards performing with Alicia Keys, along with SWV and TLC. Rhona Bennett, meanwhile, was also spotted on the red carpet at the awards ceremony in support of her group members. With speculation a buzz, En Vogue received the twenty-eighth highest number of hits on the Rock on the Net website for the month of June 2008. The following month, the group ascendeded to being the twelfth position. As of June 30, Dawn Robinson has stated officially via an En Vogue Yahoo! fan site that she will return to En Vogue the following September.

On August 6, the original members of En Vogue appeared on Los Angeles' KTLA television station and announced that they have reunited and will (initially) do spot dates around the country during the latter part of 2008. En Vogue went on to say that the original line-up will release a new album in mid-2009 as well as a television show. The foursome kicked off the Americana at Brand Concert Series in Glendale, California that same evening.

En Vogue will perform at the 2009 Essence Music Festival at the Superdome in New Orleans, Louisiana.

Hold On And Other Hits

The Very Best Of En Vogue