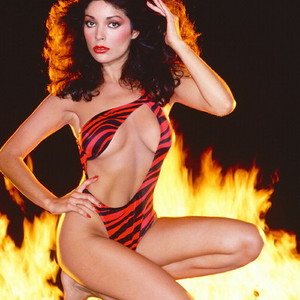 Born Patricia Kotero on August 2, 1959 in Santa Monica, California, Apollonia Kotero is a swimsuit model, actress and singer of Italian and Mexican descent. She joined Prince's entourage after the departure of Vanity, Denise Matthews, as lead in the film Purple Rain and as lead-singer of recording group Apollonia 6. Kotero had taken part in nationwide audition to find a replacement for Vanity before being cast by Prince in the role that had originally been given to Vanity.

Kotero had taken part in nationwide audition to find a replacement for Vanity before being cast by Prince in the role that had originally been given to Vanity. It was at this time that Prince gave Kotero the stagename Apollonia and she also inherited Vanity's former lead role in Prince's girl group, with original members Brenda Bennett and Susan Moonsie. Purple Rain eventually became a huge success and Apollonia attained overnight stardom.

The newly renamed Apollonia 6 released one album in October, 1984 and released the hit single "Sex Shooter". The band became famous for appearing on stage in lingerie only. Although the album is credited to a producer named Jamie Starr, it has always been obvious that the album was completely produced by Prince himself.

Apollonia had originally recorded a version of the song "Manic Monday" for the 1984 Apollonia 6 album. Written by Prince as well, the song would later become a worldwide hit single for the girl group The Bangles. It was rumored that Prince had lost interest in the Apollonia 6 project and therefore removed several hit singles from their album (shortly before its release): namely "Manic Monday," "The Glamorous Life" (which instead ended up on the debut album of drummer Sheila E), and "Take Me With U" (the duet Apollonia performed with Prince, which ended up on the Purple Rain soundtrack album instead). "Take Me With U" is Apollonia's highest charting single, reaching #25 on the Top-40 chart in the U.S..

Apollonia left the Prince camp in 1985 to pursue a role on television in Falcon Crest (1986). She was allowed to appear under her own stage name "Apollonia" on the show and also performed several solo songs, none of which would later be released (one of the songs, which was often played and referred to on the show was a title called "Red Light Romeo," which was written by US songwriter Jon Lind who had penned the US No 1 hit "Crazy For You" for Madonna). Kotero stayed on the show for 10 consecutive weeks, playing the girlfriend of teenage heartthrob Lorenzo Lamas.

In 1988 she released her first solo album, simply titled "Apollonia" on Warner Bros. Records. Containing high energy dance music, three singles were released from the album: "Since I Fell For You", "The Same Dream", and "Mismatch". It was produced by several hit producers, such as Ric Wake (Taylor Dayne, Diana Ross), Terry Lupton (Michael Learns to Rock, Jamie Stevens), or songwriter Andy Goldmark (Jennifer Rush).

She also starred in 3 straight-to-video movies: "Back To Back," "Black Magic Woman" and "Ministry of Vengeance," which can all be referred to as classic B-movies.

Shortly after these films and the release of her debut album, she retired for nearly five years. She married General Hospital actor Kevin Bernhardt but divorced him a few years later. During the break she earned a degree in film from UCLA.

In the mid-90's she slowly returned into the show business and did guest appearances on the US TV shows "Sliders" (with Jerry O'Connell) and "Air America" (starring Lorenzo Lamas with whom she had previously starred together in "Falcon Crest" in 1986). She can often be seen on film premieres and media events in California. A move into production seems to be on the cards with her work developing ideas for television.