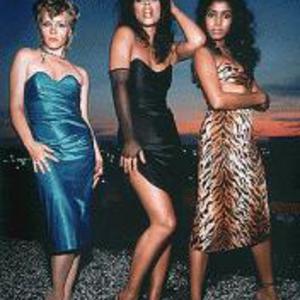 Known for its trashy, soft-porn image and sexually exploitative lyrics, Vanity 6 was a short-lived female vocal trio that came out of Prince's funk-rock empire in 1982. Vanity 6 was formed in Prince's hometown of Minneapolis, where singer/actress Vanity (whose real name is Denise Matthews) got together with fellow singers Brenda Bennett (a native of Boston) and Susan Moonsie. Supposedly backed by The Time although Prince actually performed all the music himself, Vanity 6 recorded its self-titled debut album for Warner Bros.

in 1982. The single "Nasty Girl" became a major hit, and like Prince's albums, Vanity 6 successfully bridged the gap between R&B/funk and rock/pop/new wave. Vanity 6's first album was also its last; in 1984, Vanity left the group and signed with Motown as a solo artist. Susan and Brenda, meanwhile, hooked up with singer Apollonia (another Prince disciple) and formed a new group called Apollonia 6. That trio recorded a self-titled album for Warner Bros. in 1984 and had a hit with "Sex Shooter," which was featured in Prince's film Purple Rain. Apollonia 6 also turned out to be a one-album act; in 1985, the group broke up. As a solo artist, Vanity didn't get very far commercially; none of her Motown albums were big sellers. And when she became a born-again Christian in the 1990s, Vanity gave up secular music for good.