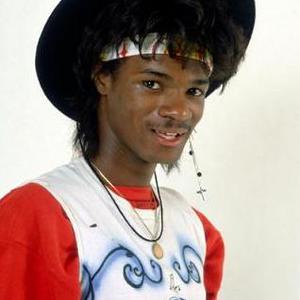 Jermaine Stewart (September 7, 1957 ? March 17, 1997) was an American pop singer, best known for his Billboard hits, "The Word Is Out" from his 1984 debut album of the same name, and "We Don't Have To Take Our Clothes Off" in 1986, from the album Frantic Romantic. Born in Columbus, Ohio to parents Ethel M. Stewart and Eugene Stewart. Jermaine always enjoyed dancing & in school he would often give dance lessons to other children for a $1 a lesson.

In 1972, the Stewart family (which consisted of Mom, Dad, Jermaine, sisters Norma, Sondra, Leandra, Leanna and brother Gene) moved to Chicago, Illinois where he took his first steps towards a career in entertainment. This was followed by stints on both American Bandstand and later Soul Train as a dancer.

Soon he would become a backup singer and dancer for several artists such as The Chi-Lites, The Staple Singers and Shalamar while recording backup vocals for such artists as Culture Club. He was featured prominently on the group's 1983 album Colour by Numbers and as a result the group used their influence to help him land a solo recording deal with Arista Records.

The 1986 Frantic Romantic album with the hit single "We Don't Have To Take Our Clothes Off" quickly went on to become a million seller, and a second single, "Jody" was released, the inspiration of the song being Jody Watley of Shalamar. A modest success, "Jody" reached both the U.K. and U.S. top 50. Another U.K. only single "Don't Ever Leave Me" was released, reaching number 76 on the British charts. The song was a ballad, and indicative of Jermaine's versatility in any musical style.

Jermaine's third album was probably his most successful internationally. Entitled Say It Again, the production was handled largely by Andr? Cymone who had previously worked with Prince and Jody Watley. The result was an almost flawless collection of pop and dance funk tracks, of which almost any song could have been a successful single.

Supported by international live dates with his band, "The Party", the title track became Jermaine's second U.S. top 40 Billboard hit and also reached the R&B top 10. In the U.K., it made it all the way to number 7, helping the album into the top 40.

The next three singles all received the remix treatment from the production company behind such hits as "You Spin Me Round" by Dead Or Alive and Rick Astley's "Never Gonna Give You Up." "Get Lucky," "Don't Talk Dirty To Me" and "Is It Really Love" found considerable European success, particularly Germany, where "Don't Talk Dirty To Me" was one of the biggest selling records of 1988, making the top 5.

At this point, Jermaine was highly focused on the mainstream pop market. His fourth and final album under his contract with Arista Records, What Becomes a Legend Most?, was filled with radio friendly catchy pop tunes. The first single "Tren De Amor" reached number 76 in the UK charts, while the follow-up, "Every Woman Wants To," didn't fared as well, only making it to number 95. Commercial success eluded this album, and a label change followed.

In 1992, Jermaine teamed up with Chicago producer Jesse Saunders for his last recorded work, an album for Reprise Records. Entitled Set Me Free, the album marked a return to the dance funk style of Say It Again. The title track was released as a single in the U.S., but found little success. The album remains unreleased.

He died in 1997 of liver cancer, caused by AIDS. Ironically, his hit "We Don't Have to Take Our Clothes Off" gained popularity as it was referring to the AIDS scare of the 1980s. In 2003, the song was placed by VH1 in its 100 Greatest One-Hit Wonders list.

In 2005, a compilation CD celebrating Jermaine's underrated contribution to '80s R&B which included several of his hits and a few previously unreleased tracks was released by BGF Records, an Ohio record label ran by Jermaine's brother.

What Becomes A Legend Most?

Is It Really Love (MCD)

Don't Talk Dirty To Me (MCD)

We Don't Gave To Take Our Clothes Off (CDS)