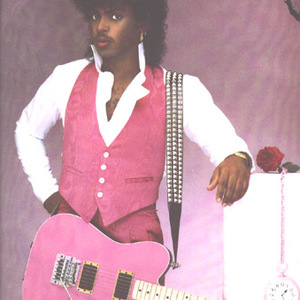 Jesse Johnson (b. Jesse Woods Johnson) is a musician best known as the guitarist in the original lineup of The Time. Johnson was born in Rock Island, Illinois on May 29, 1960. Johnson moved to St. Louis at the age of 9 and was raised by foster parents after his parents split up. At age 16 he moved back to Rock Island to live with his father. Johnson began playing guitar when he was 15, honing his chops in local rock bands such as Treacherous Funk, Pilot, and Dealer, throughout his teens and early twenties.

On a friend's recommendation, he moved to Minneapolis, Minnesota in 1981, where he met Morris Day and played briefly in Day's band which was called Enterprise. He then became the lead guitarist for the city's extraordinairy funk-rock group, The Time.

Although Prince basically recorded the first 2 Time albums on his own with Morris Day, Johnson did contribute to the Vanity 6 project by contributing a song called "Bite The Beat" co-written with Prince. On The Time's third album, Ice Cream Castle, Johnson contributed to the smash singles "The Bird" and "Jungle Love" (the group's most memorable and highest-charting single), which were helped by the popularity of the Purple Rain film.

However, in the height of The Time's popularity following the Purple Rain, Johnson left the band and signed a solo deal with A&M Records in 1984 and released Jesse Johnson's Revue the following year. Four songs were released from the album, the first being "Be Your Man" followed by "Can You Help Me" which was backed with the popular funk outting "Free World". Shockadelica containing the hit "Crazay", the duet with Sly Stone, and Every Shade of Love followed over the next 3 years, building on the inventive, elaborate sound he forged with The Time. Throughout the late eighties and early ninties Johnson also featured on the soundtracks to The Breakfast Club contributing "Heart Too Hot To Hold", a duet with Stephanie Spruill, Pretty In Pink, Action Jackson, Another 48 Hours and White Men Can't Jump.

Johnson has produced a wide variety of artists, most notable are Ta Mara and The Seen, Da Krash, Kool Skool, Janet Jackson, Debbie Allen, Cheryl Lynn, and Les Rita Mitsouko. By 1990 The Time reformed and issued Pandemonium, which was even more of a group effort than Ice Cream Castle. The album allowed Johnson to contribute a hard rock guitar heavy edge to several tracks.

After the band dissolved once again, Johnson remained in the background for several years, quietly contributing to soundtracks and other artists. His music he recorded for the film A Time To Kill was not released on the soundtrack but can be heard in the film. Finally in 1996, Johnson released another album, Bare My Naked Soul on the Dinosaur Entertainment label. The album was a departure from his funk-filled albums from the 1980s and instead verged into alternative rock.

In 2002, the release of the Cadillac Blindside album These Liquid Lungs saw Johnson being credited with the photography.

A new album is set for release in 2006. Johnson has spent the last three years working on it and fans wait in eager anticipation for the album to be released.

Every Shade Of Love