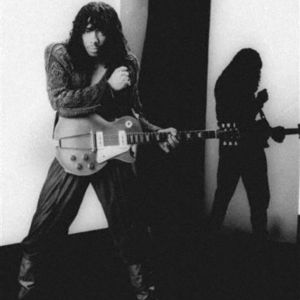 Rick James (born James Ambrose Johnson, Jr; February 1, 1948 - August 6, 2004) was an American funk and soul musician from Buffalo New York, who worked as a singer, keyboardist, bassist, record producer, arranger, and composer during his long career. One of the most popular artists on the Motown label during the late 1970s and early 1980s, James was famous for his wild brand of funk music and his trademark cornrow braids. As time went on, James was given the unofficial title The King of Punk-Funk.

After dropping out of high school and joining the US Naval Reserve, he eventually went AWOL to concentrate on music. He fled to Canada in 1964 and started using the name Ricky Matthews. In Toronto, he led various incarnations of Mynah Birds, some of which included Neil Young and Bruce Palmer (who would go on to form Buffalo Springfield) and Nick St. Nicholas (later of Steppenwolf). After scoring a deal with Motown, the band was swindled by their manager and the label discovered James was on the lam, and the band split up.

After serving time for desertion, James tried to rekindle the Mynah Birds, but eventually found a role as a writer and producer at Motown, using the name Terry Johnson on tunes for Smokey Robinson & The Miracles, Bobby Taylor And The Vancouvers and The Spinners. He moved to California in 1969 and formed Salt 'n' Pepper (not to be confused with Salt-N-Pepa) and worked with a number of bands (Heaven and Earth, Great White Cane, and Stone City Band) before returning to Motown, where he developed the gritty funk sound that would bring him hits and notoriety. "Super Freak" in 1981, from the Street Songs album, was his biggest hit. During this period, he also helped launch the careers of R&B singer Teena Marie and the Mary Jane Girls as well as producing Eddie Murphy's hit, Party All the Time.

After remaining moderately successful through the 80s, his popularity waned in the 90s and he succumbed to drugs, having frequent run-ins with the law, one of which resulted in a prison term. After an unsuccessful comeback attempt in 1997 and suffering a stroke, James retired. He died in 2004 from heart failure with multiple contributing factors.

Motown Legends: Give It To Me Baby