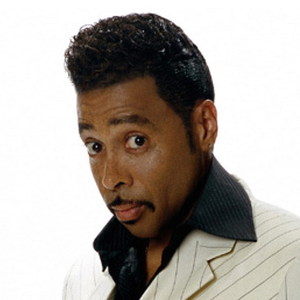 Morris Day (born December 13, 1957, in Springfield, Illinois) is an American musician and composer. Although a gifted drummer, he is best known as the charismatic lead singer of The Time, a band that also launched the careers of famous producers Jimmy Jam and Terry Lewis. Day was a high-school classmate of both Prince and Andr? Cymone and the trio formed an early band called "Grand Central", later renamed "Champagne".

Day was a high-school classmate of both Prince and Andr? Cymone and the trio formed an early band called "Grand Central", later renamed "Champagne". Later, Prince embarked on a solo career but retained Cymone for his backing band. The two began to plan a side-group that would focus more on R&B, while Prince would continue to explore various musical styles. The Time was composed of 4 members from an earlier funk group called "Flyte Tyme", but the lead singer had not been chosen. Sue Ann Carwell was auditioned and Alexander O'Neal nearly became The Time's lead singer, but dropped out due to payment negotiations. Day, who was now in a band called "Enterprise" allowed Prince to have a song called "Partyup" for his Dirty Mind album and Prince would soon return the favor by giving Day the job of lead singer. Day would suggest guitarist Jesse Johnson, who completed the band's ensemble.

The Time's most prolific and visible period came in 1984 when Day played the antagonist to Prince in his film Purple Rain, which helped establish Day's playboy stage presence. Typically escorted by his valet, "Jerome" (Jerome Benton), Day won fans with his exaggerated vanity ("Jerome bring me my mirror!") and strutting bravado, acting as a comic foil to Prince's romantic, sensitive lead. This persona was further exploited for comic effect on The Time's records, on songs such as "Chili Sauce" and "If The Kid Can't Make You Come" from the album Ice Cream Castle.

That album, the group's most popular, is best remembered for the infectious singles "Jungle Love" and "The Bird". With their palpable pop energy and catchy choruses, both songs were huge hits on both Urban and Pop radio. But it wasn't until 1990,when the Time scored a #1 R&B hit with "Jerk Out" (a dance/New Jack Swing cut from their reunited fourth album: Pandemonium . This album also featured the original members of the band). The same year, Day formed his own girl band (not unlike Prince's Vanity/Apollonia 6) called The Day Zs. From that high point, Day's success began to wane in the 1990s. With the breakup of his band, the mediocre sales of his solo records, and the general decline of Prince's popularity, Day's public visibility and creative output waned considerably.

Today, he remains a popular concert draw, fronting a revamped lineup of The Time. Day continues to employ "Jerome" in his stage shows and the comic scenes the two act out together are typically the highlight of a Time performance.

Though he had continued to act in films from time to time in small parts (Richard Pryor's Moving being a brief but memorable turn), Day's presence on the screen decreased until, in 2001, he returned to film in Kevin Smith's Jay and Silent Bob Strike Back, performing "Jungle Love" with The Time and dancing with the movie's stars in the movie's coda.