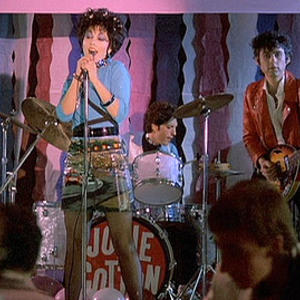 Born Kathleen Josey in Dallas, Texas, Cotton sang with Dallas area bands before moving to Los Angeles, California. Although the The Go-Go's played "Johnny Are You Queer" in their live shows before they signed with I.R.S., it was Cotton who recorded the song for Bomp Records in 1981. The song was originally decried as "offensive" and "homophobic" by many critics and listeners - which may have helped its popularity.

Cotton has always maintained she is a staunch supporter of gay rights and frequently turns up at Gay Pride events. The performance of the single attracted the attention of Elektra Records who re-released both the single and a full album in 1982. The Convertible Music LP featured music reminiscent of the 1960s girl group tradition. Cotton made an appearance in the 1983 film Valley Girl, singing "Johnny Are You Queer?" , "He Could Be the One" and "School Is In" during the film's prom scene. Elektra issued her follow up album, From the Hip in 1984 which failed to produce a hit. "Johnny Are You Queer" was recently featured in the film "Jackass: Number Two" during the "Anaconda Ballpit" stunt.

Cotton recorded Frightened by Nightingales for her own ROXCO Records label in 1993. Continuing to work behind the scenes, Cotton co-founded B-Girl Records, which issued recordings by Goldenboy and Alaska! A new album of her own music, The Influence of Fear on Salesmen, was planned for release in 2002 on B-Girl but failed to materialize under that title. Cotton released Movie Disaster Music in 2006.

Cotton was the long-term partner of legendary punk pioneer record producer geza x, notable for producing records for such of early and influential California punk bands such as the Dead Kennedys, the Germs, Black Flag, the Avengers and The Weirdos. Although now seperated, the two currently co-own Satellite Park Recording in Malibu, California.

Everything Is Oh Yeah

Invasion Of The B-Girls