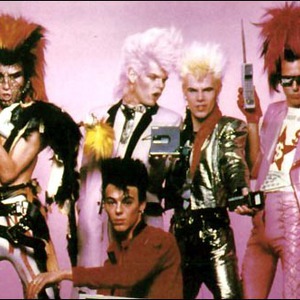 Sigue Sigue Sputnik is a British Pop-cyberpunk band that achieved moderate fame in the mid- to late 1980s, when the song Love Missile F1-11 hit the pop charts around the world. "Love Missile F1-11"'s success was due in part to the song's use in the hit movie Ferris Bueller's Day Off. Led by former Generation X bassist Tony James, the band created a unique style of new wave music by layering vocals, yelps, guitar riffs, electronic sound effects, and short samples over pulsating synthesizer bass lines.

The themes and imagery in the band's songs were often influenced by futuristic, dystopian, or post-apocalyptic films such as a clockwork orange, the terminator, Blade Runner, and the Mad Max trilogy. The band's music and image also mashed together a range of other pop culture influences, including the New York electronica duo Suicide, Marc Bolan's T-Rex, and the swagger and sex appeal of Eddie Cochran, Elvis Presley, and glam rock.

The original line-up also featured Martin Degville, Neal X (Whitmore), Chris Kavanagh, and Ray Mayhew. Tony James' friend Mick Jones, a former member of The Clash, gave James advice about starting the band and selecting musicians. While searching for members, in 1983 Tony James tried out Andrew Eldritch from The Sisters of Mercy and, on Mick Jones' suggestion, auditioned the then-unknown Annie Lennox. As well, Jones gave James a Roland G-707 synth guitar, which at the time was a new and rarely-used device. The futuristic, electronic sounds of the synth guitar helped James to create Sputnik's new wave-cyberpunk sound.

The band took its name from a Moscow street gang called Sigue Sigue Sputnik, which means "Burn, burn, satellite." Their outlandish appearance and image, which included towering, multicoloured mohawk hairstyles, wigs, makeup, and multiple piercings, and gender-bending fetish clothing (plastic, rubber, or leather outfits, fishnet stockings, and stiletto heels) garnered a great deal of attention from the media. While these styles have since been used by a number of gothic or glam bands, in the mid-1980s, Sigue Sigue band members' appearance was unique and startling.

The "packaging" of the band's appearance and presentation was carefully considered well before the band ever performed in public. Inspired by the Sex Pistols manager Malcolm McLaren's unorthodox methods of promoting a band, Tony James generated a great deal of hype about Sigue Sigue Sputnik, while wisely not allowing anyone from the music industry a chance to hear the band. James famously showed record executives a short video collage of futuristic and science-fiction movie clips as a "demo tape" of the band. The buzz became a frenzy as several record labels began a bidding war to sign Sigue Sigue Sputnik. James finally settled on EMI, which was rumored to have given the band a ?1 million advance.

The group split soon after the release of their second album, Dress For Excess (the initial single from which, Success, was produced by British hitmakers Stock Aitken Waterman). Tony James stated that the band "...couldn't sustain this pretend bastardized version of Sputnik." James also blamed the media for the band's fall from grace. When Sputnik's first singles were released, the media and James' promotional efforts worked symbiotically, sharing the mutual benefits of the band's hype and shock value. Once the initial shock and tabloid outrage over the band's unusual image and appearance had worn off, media coverage became dismissive, criticizing the band's focus on image and style.

The band was reformed once in the 1990s (featuring Tomoyasu Hotei on guitar and Christopher Novak singing) releasing Sputnik: The Next Generation and once again in 2001 with Martin Degville and Neal X, which resulted in the release of Piratespace. The reformed Sigue Sigue Sputnik continues to play live, and it has also produced a number of remixes of other artists' work. In 2004, lead singer Martin Degville left the band to pursue a solo career.

Blak Elvis vs. The Kings Of Electronic Rock And Roll