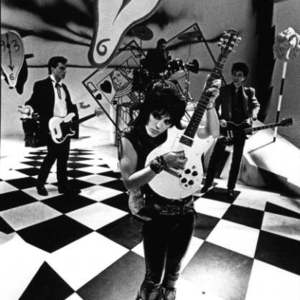 Former The Runaway's guitarist Joan Jett began forming the Blackhearts, a backing band for her burgeoning solo career, with manager Kenny Laguna's assistance circa 1979. Since then the roster has included the current lineup of Thommy Price on drums, guitarist Dougie Needles and bassist Enzo Penizzotto and numerous predecessors like Gary Ryan, Eric Ambel, Danny Furious, Lee Crystal and Kasim Sulton.

In 1979 , Having already recorded solo tracks backed and produced by ex- Sex Pistols Steve Jones and Paul Cook, she placed an ad in the L.A. Weekly "looking for three good men." John Doe of X sat in on bass for auditions held at S.I.R. studios in Los Angeles. He mentioned a local bass player, Gary Ryan, that had recently been crashing on his couch. Ryan was part of the L.A. punk scene and had played bass with local artists Top Jimmy and Rik L. Rik. He had been a huge fan of the Runaways and Jett for years. Jett recognized him at the audition and he was in. Gary recommended guitarist Eric Ambel, who was also at the time part of Rik L. Rik. The final addition to the original Blackhearts was drummer Danny Furious aka Danny O'Brien, formerly of the infamous San Francisco band The Avengers. This line-up played several gigs at the Golden Bear and Whisky a Go Go in Hollywood before embarking on their first European tour which consisted of an extensive tour of the Netherlands, and a few key shows in England including the Marquee in London.

Upon returning to the States, Jett, Ryan, and Ambel moved to Long Beach, N.Y. O'Brien stayed behind in England to pursue other interests. Auditions were set up and Lee Crystal, formerly of The Boyfriends and Sylvain Sylvain, became the new drummer. Joan Jett and the Blackhearts then toured throughout the States and built quite a following in New York. Jett and Laguna soon used their personal savings to press up copies of the Joan Jett album in 1980 and set up their own system of independent distribution, sometimes selling the albums out of the trunk of Laguna's Cadillac at the end of each concert. Laguna was unable to keep up with demand for her album. Eventually, old friend and founder of [abel]Casablanca Records, Neil Bogart, made a joint venture with Laguna and signed Jett to his new label, Boardwalk Records and re-released the "Joan Jett" album as Bad Reputation in 1981. After a year of touring and recording, The Blackhearts recorded a new album entitled I Love Rock N' Roll for the label. During the recording process, Ambel was replaced by local guitarist Ricky Byrd. Eric went on to a successful career as a founding member of The Del-Lords, and later worked as a producer of a wide variety of bands. He currently plays with his band, The Yayhoos, and was a member of The Dukes, Steve Earle's band from 2000 to 2005.

With Byrd on guitar, Joan Jett and the Blackhearts recorded their hit album. The new single was a re-recording of the title track, "I Love Rock N' Roll", which in the first half of 1982 was number one on the Billboard charts for seven weeks in a row. It is now Billboard's #28 song of all time.

A string of Top 40 hits followed, as well as sellout tours with The Police, Queen, and Aerosmith, among others. Jett was the second American act of any kind to perform behind the Iron Curtain, after Blood, Sweat & Tears appeared in Romania in 1969. She was among the first English-speaking rock acts to appear in Panama and the Dominican Republic.

After receiving her own MTV New Year's Eve special, Jett beat out a number of contenders to appear in the movie Light of Day with Michael J. Fox. Bruce Springsteen wrote "the title song" especially for her, and her performance was critically acclaimed. It was about this time that Ryan and Crystal left the Blackhearts. They were soon replaced by the powerful rhythm section of Thommy Price and Kasim Sulton from Utopia. Later that year, Jett released Good Music, which featured appearances by The Beach Boys, The Sugarhill Gang and singer Darlene Love.

Joan Jett and the Blackhearts became the first rock band to perform a series of shows at the Lunt-Fontanne Theatre on Broadway, breaking the record at the time for the fastest ticket sell-out ever. Her next release, Up Your Alley, went multi-platinum and was followed by The Hit List, which was an album consisting of cover songs. During this time, Jett also co-wrote the song "House of Fire", which appeared on Alice Cooper's hit 1989 album Trash.

Her 1991 release, Notorious (which featured The Replacements' Paul Westerberg) was the last with Sony/CBS as Jett switched to Warner Brothers. A CD single of Cole Porter's "Let's Do It" featuring Jett and Westerberg was also released during this time and appeared in the song credits for the movie Tank Girl. In 1993, Jett and Laguna released Flashback, a compilation of various songs on their own Blackheart Records.

The press has touted Jett as the "Godmother of Punk" and the "Original Riot Grrrl". In 1994, the Blackhearts released the well received Pure and Simple, which featured tracks written with Kat Bjelland (Babes In Toyland), Donita Sparks (L7) and Kathleen Hanna (Bikini Kill).

In 1999 she put out the sexually charged Fetish and followed that up with politically outspoken Sinner in 2006.

She continues to tour each year, performing USO shows in places as far off as Afghanistan, and has a regular sattellite radio show. The current touring band includes longstanding drummer Thommy Price and manager Kenny Laguna on keys along with Dougie Needles on lead guitar and Enzo Penizzotto on bass. .

Glorious Results Of A Misspent You (Bonus Tracks)

Fit To Be Tied: Great Hits