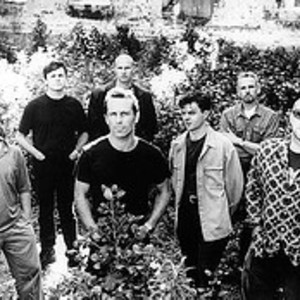 Hunters & Collectors were an Australian Rock band, formed in 1981 in Melbourne, who were originally influenced by German experimentalists like Can and later leaning more towards popular rock. Taking their name from a Can song, the band was formed by Mark Seymour (guitar, vocals), John Archer (bass), Doug Falconer (drums), Geoff Crosby (keyboards), Greg Perano (percussion), Ray Tosti-Gueira (guitar), and Robert Miles (sound engineer and art director, considered a full member).

After recording their first album, which featured the single Talking to a Stranger, the band traveled to Germany to record with famed producer Conny Plank. In 1984, the band reorganized, adding a three-piece horn section and losing the second guitarist. By 1986, the band's style was moving away from the sweat-drenched rhythmic jams of their early days to a more song-centered aproach centered on Seymour (whose younger brother Nick was a member of Crowded House). Throw Your Arms Around Me was a successful single in many countries.

The band was never able to match the worldwide attention they reached in 1986, though they continued to record with considerable success in Australia, and maintained a loyal fanbase elsewhere.
They broke up in 1998, but returned to play one concert on 14 March 2009 for "Sound Relief" at the Melbourne Cricket Ground, which was a multi-venue rock music concert in support of relief for the Victorian Bushfire Crisis.

When The River Runs Dry