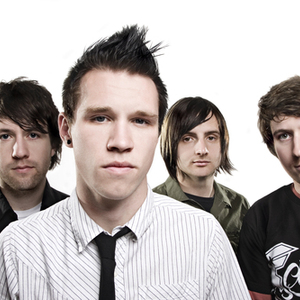 Hawk Nelson was formed in Peterborough, Ontario, Canada in 2003 by Jason Dunn, Dave Clark, Matt Paige, and Daniel Biro. The band played independently in Peterborough, Ontario for a few years before they signed with Tooth And Nail Records, largely on the recommendation of Trevor McNevan, the lead singer of fellow Tooth and Nail bands Thousand Foot Krutch and FM Static. McNevan, also from Peterborough, is credited with discovering the band.

The band played independently in Peterborough, Ontario for a few years before they signed with Tooth And Nail Records, largely on the recommendation of Trevor McNevan, the lead singer of fellow Tooth and Nail bands Thousand Foot Krutch and FM Static. McNevan, also from Peterborough, is credited with discovering the band. In July of 2004, Hawk Nelson released their major label debut Letters To The President. It was produced by Aaron Sprinkle and McNevan, who also co-wrote the album's fourteen songs. He has also appeared on some of the band's songs, as well as in their video for the song "California". In October 2005, the band re-released Letters To The President, with new material including their cover of The Who's My Generation, three acoustic versions of some of their hits, and a limited edition cover. Dave Clark was replaced by Jonathan Steingard on guitar in 2004.

The band released their second studio album, titled Smile, It's The End Of The World, on April 4, 2006. The album's first single, "Everything You Ever Wanted", went on to hit #1 for 9 weeks on the R&R Christian CHR chart, and was the fourth most played song of 2006. Hawk Nelson released a 3-track Christmas EP titled Gloria on November 21, 2006.

In 2007, Aaron Tosti (who had joined the band to replace Matt Paige on drums) left the band to pursue other musical ventures and was replaced by Justin Benner. Justin had previously toured with Hawk Nelson before with The Send. Hawk Nelson's third full album, Hawk Nelson Is My Friend was released on April 1, 2008, and featured songs co-written by Trevor McNevan of Thousand Foot Krutch, Raine Maida of Our Lady Peace, and Richard Marx. The album was nominated for a 2009 Grammy Award in the category for Best Recording Package.

On July 21, 2009, Hawk Nelson released their second single from their fourth album Live Life Loud called "The Meaning Of Life", and on August 8, the song "Alive" began to be played on Christian Radio. They released the album in September of the same year.

Their fifth studio album, Crazy Love, which was released in stores February 8, 2011.

Tours
The band spent the summer of 2006 touring the major Christian music festivals. In the winter of 2006, they toured with TobyMac's Winter Wonder Slam tour along with The Afters, Family Force 5, and Ayiesha Woods. In 2007, Hawk Nelson performed at Winter Jam with a wide variety of other Christian bands, which were Newsong, Jeremy Camp, Steven Curtis Chapman, Sanctus Real, and Britt Nicole. Also, Hawk Nelson toured with MxPx, Run Kid Run, Project 86, The Fold, and The Classic Crime. In January 2008, the band headlined their own tour, that they called the Green T Tour, which also featured Capital Lights and Run Kid Run. In the summer of 2008, Hawk Nelson played their second annual Faith Nights Baseball Tour.

Mainstream Success
The band has achieved some success in the mainstream as well. They portrayed The Who on an episode of the NBC drama American Dreams, and they recorded a song named "Bring 'Em Out" for the 2005 motion picture Yours, Mine, and Ours featuring Drake Bell. This song and another hit song "The Show" were used on Sunday Night Football commercials. "Things We Go Through" from Letters to the President was also featured in Yours, Mine, and Ours. Bulletproof Records and Producer Ralph Sall have assembled the compilation Charlotte's Web (Music Inspired By The Motion Picture) in December 2006, which features "Everything You Ever Wanted" by Hawk Nelson, as well as music by Amy Grant and Billy Ray Cyrus. In 2008, the band also contributed a cover of "Don't You (Forget About Me)", originally by Simple Minds, off the JCPenney Presents: Don't You Forget About Me. The Covers (EP). The song was also featured in back-to-school commercials for J.C. Penney. The song "Live Life Loud" was featured in the trailer for the movie, "Diary of a Wimpy Kid 2: Rodrick Rules," and was available in the Rock Band store during the first week of April 2010.

Hawk Nelson Is My Friend