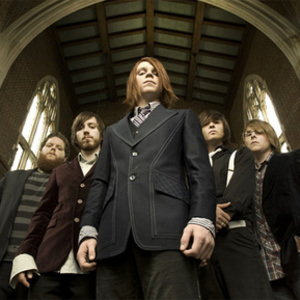 At the age of 11, Leeland Mooring wrote his first song, "Shine". After having a successful performance of it at a church in Illinois while the Moorings were touring the United States as evangelists, he felt a spiritual calling towards music. His mother, Cyndy Mooring, entered him in a contest in Nashville, Tennessee at the age of 14, and was a finalist in the songwriting and artist divisions. Although he did not win, one of the contest judges, Kent Coley, took interest in the young teen. He is now their manager. Later at the age of 15 he attracted the attention of Eddie DeGarmo, President of EMI CMG Publishing, and signed a songwriting contract with EMI CMG Publishing. While practicing after youth group, Leeland, his older brother Jack, their cousin Jake Holtz, and two close friends from church, Mike Smith and Jeremiah Wood, realized they had become a band. They decided to use Leeland's name for the band because they liked the way it sounded. They later started practicing in the night at a funeral home.

The band's debut album, Sound of Melodies, was released in the USA on August 15, 2006. At the 49th Grammy Awards on December 7, 2006, the album was nominated for "Best Pop/Contemporary Gospel Album". Sound of Melodies was also released in Japan on March 21, 2007, with the title song "Sound of Melodies" peaking at #6 on the general Japan radio chart.

Their second album Opposite Way, released on February 26, 2008, received success in its first few weeks of release. In its debut week, Opposite Way reached #1 on the iTunes Christian Albums chart. By March 15, 2008, it had reached a peak position of #72 on the Billboard Top 200 albums. Since September 2007, Leeland has been on "The Altar and the Door Tour" with Grammy Award-winning band Casting Crowns, which will continue until May 1, 2008.

Leeland's third studio album, titled Love Is on the Move, is scheduled for release on August 25, 2009 in the United States.

Leeland performed at all the Student Life "Clarity" conferences in 2007. In late 2007, they were on The Altar and the Door tour with Casting Crowns and John Waller, which started September 27, 2007 and ended December 2, 2007. They are currently on the spring leg of the tour, which began on January 31, 2008 and will end May 1.Leeland made their Canadian debut in Ottawa, Ontario at the Life Centre during the annual Shift Conference on March 10-11, 2007.
In September 23, 2009, the band will launch their "Follow You Tour", co-headlining with Brandon Heath and featuring Francesca Battistelli as an opening act.

Christ Be All Around Me (Live)

Love Is On The Move