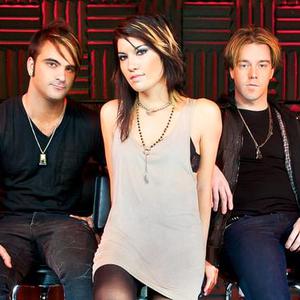 Sick Puppies is an alternative rock band formed in 1997 in Sydney, Australia. The band consists of vocalist Shimon Moore, bassist Emma Anzai and drummer Mark Goodwin. When the Australian band decided to break through in the U.S., founding members, vocalist/guitarist/songwriter Shimon Moore and his high school classmate, bassist Emma Anzai, simply picked up and moved lock, stock and guitar amps to L.A., advertised for a drummer on Craig's List, and were soon joined by Orange County native Mark Goodwin.

When the Australian band decided to break through in the U.S., founding members, vocalist/guitarist/songwriter Shimon Moore and his high school classmate, bassist Emma Anzai, simply picked up and moved lock, stock and guitar amps to L.A., advertised for a drummer on Craig's List, and were soon joined by Orange County native Mark Goodwin.

After getting signed and putting out their debut, the trio made their own video independently to accompanying the first single, ?All the Same,? shot in a Sydney shopping mall in which fellow Aussie Juan Mann held up a hand-written placard offering passersby ?Free Hugs.? The clip attracted over 64 million views on YouTube alone, and spawned a world-wide phenomenon.
Three years later, Sick Puppies are back with a new album and producing team from Dressed Up As Life, Rock Mafia's Antonina Armato and Tim James. Together they've created a sound that reflects the past four whirlwind years spent in the rock and roll fast lane, on the grueling tour grind, honing their chops until they were a finely tuned powerhouse ready to let loose with the anger, frustration and triumphs built up from all that road work.

Songs like the storming first single, ?You're Going Down,? which is being used as the theme song for the WWE's Extreme Rules pay-per-view broadcast, and ?Street Fighter War,? which was used as part of the national marketing campaign for the popular video game Street Fighter IV, distill all that energy into high-powered festival anthems.

?There was plenty of fuel, a lot of hard times, strain, personal problems and all that jazz,? says Moore of the creative process, ?and we just put it all into the record. There's no way you can prevent it from flooding into the music.?

Emma agrees much of that aggression found its way onto the album. ?When you're on that one-track path, you tend to suppress all the other stuff that may come up along the way. But all those years of playing live have paid off with us sounding stronger and more cohesive than ever before. When you perform, everything is very visceral. This album is an expression of that kind of raw emotion.?

?We wanted a big-sounding record that would connect with live audiences,? adds Shimon. ?We just stuck with what we knew worked from playing over the last few years. We had a little more creative control in the studio this time, more ideas about what we wanted to sound like.

?Second time around, you're always a little bit more aware of how to do things,? says Emma. ?We're really beginning to know what kind of sound we wanted, and how to achieve certain effects. We're now mindful of how these songs will come across live.?

New songs like the Buzzcocks-meets-Pistols drug-laced speed-punk of ?Survive,? the heavy Nirvana-esque grunge drone of ?I Hate You? and the jagged shards of Rage Against the Machine rhythms in ?So What I Lied? give Tri-Polar its feel of cathartic build-and-release.

?We wanted to get back to a sort of organic feel,? says Shimon. ?All of that stuff you have to internalize on the road?when you can't afford to throw a hissy fit because you're doing an interview or performing on-stage?we let out on this record.?

Now that Tri-Polar is done, Sick Puppies are preparing to get back out there and do what they do best?play live.

?Our whole spirit comes together when we're on-stage,? says Emma. ?When we get ready to go out there, we're like gladiators entering the arena.?

?I can't wait,? says Mark about returning to the road. ?If there's anything that people should know, it's that we're all about playing live.?

In addition to concerts, Sick Puppies can be seen on theatre screens in Rock Prophecies, an award-winning documentary about legendary rock photographer Robert M. Knight, who famously took the band under his wing when they first came to the States. The film also includes interviews with Jeff Beck, Carlos Santana, Slash, Steve Vai, Billy Gibbons, Def Leppard, Kenny Wayne Shepherd, Rick Nielsen and Joe Bonamassa, among others, who knew Knight, dubbed by some, ?the Forrest Gump of rock and roll.?

?He was the first person we met and got to know when we came over here,? says Emma. ?He introduced us to other people we still work with to this day.?

Sick Puppies have more than survived since their arrival in the U.S. by dedicating themselves to getting their music heard on a variety of different media?including TV commercials, theme songs, ?Free Hugs? videos, documentary films and, of course, the Internet.

?There are just so many options out there,? acknowledges Shimon. ?Every band needs a kind of hook, and we've been lucky because we've had more opportunities than a lot of others get.?

?I used to be much more concerned with fame, fortune and rock stardom,? admits Shimon. ?Now my main focus is joy. A few things have happened to me over the last few years which made me realize nothing is forever. There's always a negative and positive way to look at stuff, and you can eliminate the negative by focusing on the positive, but that's the most difficult thing in the world to do.?

On Tri-Polar, Sick Puppies see the glass as not just half-full, but brimming over with the kind of solid-rock anthems that'll remind even the most cynical that absolutely anything is possible.

Live At House Of Blues Cleveland