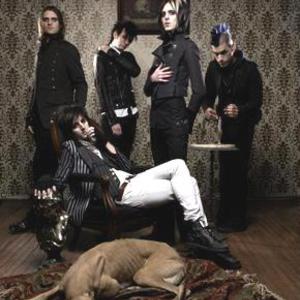 Kill Hannah is an Electronic Rock / Alternative band from Chicago, Illinois, currently signed to Original Signal. Kill Hannah formed in 1995 in a dorm room at the Art Institute of Chicago. Between 1996 and 2002, Kill Hannah self-released a slew of albums, singles and EPs independently -- all of which quickly sold out of multiple pressings. Kill Hannah signed with Atlantic Records in late 2002. They recorded their Atlantic Records debut For Never and Ever in Los Angeles in the winter of 2003 with producer Sean Beavan (No Doubt...

Kill Hannah signed with Atlantic Records in late 2002. They recorded their Atlantic Records debut For Never and Ever in Los Angeles in the winter of 2003 with producer Sean Beavan (No Doubt, Marilyn Manson, Nine Inch Nails) and mixer Tim Palmer (U2, The Cure, Tears For Fears). Through much of 2003 and 2004, Kill Hannah has toured separately with Chevelle, H.I.M., and The Sounds, while also opening for Evanescence, Jane's Addiction, Everclear, Eve 6, The All-American Rejects, Fuel, P.O.D., The Distillers, Story of the Year, Three Days Grace, Alien Ant Farm, The Buzzcocks, Andrew WK, Trapt, and many others. The single "Kennedy" debuted at #2 on modern rock radio, was performed on "Last Call with Carson Daly", and featured on such hit television shows as Jack & Bobby, One Tree Hill, and North Shore.

While producing their second album, drummer Garret Hammond left the band for family reasons, although he still performed all of the percussion on the CD. He is no longer a member of the band.

The ex-girlfriend of lead singer, Mat Devine, is the band's namesake. The two met at a college in Normal, Illinois and dove into an intense and strange relationship, which ended in the same fashion. Hannah Eckberg is believed to now live somewhere in Europe.

Kill Hannah released their second major label album, "Until There's Nothing Left Of Us" on August 1st 2006 with the single "Lips Like Morphine". They subsequently toured with acts as diverse as 30 Seconds to Mars, Papa Roach, Strata, Sick Puppies, and Flyleaf, ending up their North American touring cycle in support of the record opening for Alice in Chains and Velvet Revolver in summer 2007. Several short England-only tours followed.

In December 2007, Kill Hannah released a self-produced independent CD entitled "Hope for the Hopeless" which included B-sides, rarities, and several heretofore unreleased demos. The CD was released in conjunction with the band's fifth annual Christmas show in Chicago, New Heart for Xmas 5, which was expanded to two nights in 2007 with a small fan show the first night and a show at the Vic Theater for a larger audience the next night.

In January 2008, the band announced that they had signed to Roadrunner Records, and would be touring with Aiden in support of the European release of "Until There's Nothing Left of Us". They then started their headline tour in Europe in Spring 2008, returning after a short break in Autumn with "Hope For The Hopeless". After contending with a massive tour bus fire that blackened most of their belongings and travel documents in the Alps, the band continued thier tour unharmed and ready to fight.

In December 2008 "New Heart For Xmas 6 or NH4X6" proved a huge success for the band with an audience thousands and unbelieveable support from their fanbase [The Kill Hannah Kollective or KHK]*. In fact, there were so many fans that the band yet again extended the show to spread over two days with a special "VIP's only" show at the Metro where they played through their EP album "Here Are The Yound Moderns".

Guitarist Jonny Radtke did not join the band on the Europe leg of their fall 2008 Hope For The Hopeless Tour. Tom Schleiter, the guitarist from Powerspace, joined them in his place. Radtke returned to play the band's yearly 'New Heart For Xmas' show in Chicago (during which the band premiered two new songs - "Snowblind" and "Radio", but bassist Greg Corner later confirmed in a radio interview with Chicago's Q101 that Radtke has in fact left the band to pursue other projects and has not been present in recording their new album. Posts on Radtke's Twitter account refer to his new side project, Polar Moon. On September 11, 2009 he confirmed that he has joined the band Ashes Divide.

Kill hannah's newest album, 'Wake Up the Sleepers' was released in 2009, followed by extensive touring, including opening for Smashing Pumpkins and a headline UK tour.

Cover songs:
Aplogize - One Republic
Cherub Rock - Smashing Pumpkins
Rebel Yell - Billy Idol [On "Hope for The Hopeless"]
Under the Milky Way - The Church [On the USA's version of "Until There's Nothing Left Of Us"]
Under Pressure - Queen [Used as part of the soundtrack for the movie "The Invisibles"]

Music Videos:
Lips Like Morphine
Boys and Girls
Unwanted
Agent Orange Skies
From Now On
Hummingbirds The Size Of Bullets
Hit The Planes Down
Crazy Angel

* The Kill Hannah Kollective [KHK]
The Kill Hannah Kolective is a fanbase brought together by founder Jylane Clark and spread over just about all the countires of the world. This global family is here to promote and offer support to the band and have been thanked for their efforts on the inside cover of "Until There's Nothing Left Of Us" and "Wake Up the Sleepers."
"It's a movement, not a trend" - Mat Devine.

Wake Up The Sleepers

Hope For The Hopeless

Until There's Nothing Left Of Us

The Curse Of Kill Hannah